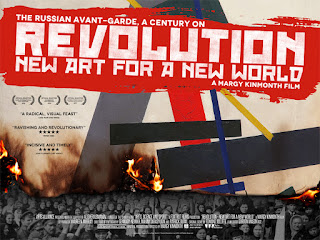 With the documentary on BBC4 tonight, a reminder of Susan Omand's thoughts on Revolution: New Art for a New World...

Wow. What a powerful, moving and informative documentary! I realise that I am probably the perfect audience for it though, being interested in both history and art, and I went into it hoping that it would not disappoint but I got so much more out of watching it than even I thought I would.

Russian history has always fascinated me, the revolutionary years especially, but I didn’t really know much past the norms of Lenin and Stalin, and I certainly hadn’t considered how the political landscape affected the cultural landscape in any way other than the creation of propagandist posters. This documentary tackled both of these areas, using art, both on canvas and on film, and the lives of the artists involved to show the progression of the political movements from 1917 and the Revolution itself, onwards through the years until the death of Stalin. The actual history was very well presented and acted as a physical chronology to allow the art to be related to specific times. Even without the artistic element I felt I learned a lot as it was hugely informative without making assumptions on previous knowledge and there were plenty of snippets to interest even those who know a lot about the era as well as those knew to the study of the time. The documentary also talked to the grandchildren of famous revolutionary artists and that really helped to bring the whole history to life as you get the personal viewpoint rather than the (literal) party line.

The inclusion of film and photography in the documentary is also vitally important from a social history point of view. I was fascinated that, even in the very early 20th century, real lives and real deaths were being shockingly captured as they happened with no room for “artistic licence” and amazingly these have been preserved as a historical record. The documentary includes a photo by Karl Bulla, the acknowledged “father” of photo reporting, which showed people lying dead and injured in the street in after Government Troops Fired on Demonstrators in 1917. There was also film of a faked storming of The Winter Palace, used for propaganda and photos taken in the countryside 20 years later as the famines started to bite that showed the establishment in a much less favourable light. 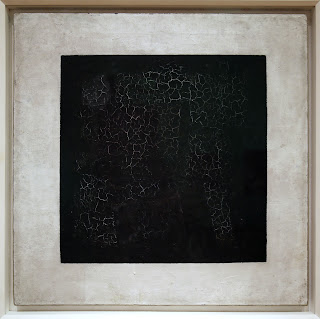 But it is the on-canvas art that really captured my attention. The diametric swing from classical realism to avant-garde abstraction and then back within only a couple of decades, and the conflicts which arose from that alone, was stunning. As well as the propagandist art that I was aware of, wonderfully depicted in the photo montage work of Klutsis, and the fluid, although still figurative, abstract work of the likes of Kandinsky and Chagall, I discovered a whole new genre of art and an artist that I didn’t know existed. Part of the Avant Garde movement, Suprematism was the name of the art created by Kazimir Malevich and it just blew me away. It isn’t abstraction in the true sense of the word as his work isn’t an abstract, or summary, of anything to do with the real world in any way – there is no human or natural connection. Instead they are geometric lines and shapes in vibrant colours set against a plain white background, stark in form and contrast. It’s so modern, so utterly space age, it hurts and I can hardly conceive that it was created a century ago. One of my favourite pieces (above), a single black square on a white ground, took on extra resonance thanks to the explanation in the documentary of how it was initially hung; corner on in a room in the same way as the gold embellished religious iconography that pre-revolutionary Russia was so famous for. Just think about the implications of that for a moment in the context of everything going on around the same time. Religion, “the opiate of the masses,” is replaced by ... nothing. And, as Dostoyevsky is reputed to have said, “Without God, everything is permitted.” That ... just... that. One single black square turns my understanding of the world on its head and I am in awe.

Anyway, if you are a history fan, or even vaguely interested in the times of Lenin and Stalin in post-revolutionary Russia, you will get such a lot from this documentary. If you also love art, you will be utterly astounded by it.

REVOLUTION: NEW ART FOR A NEW WORLD will be broadcast in the BBC’s upcoming Russian Revolution Season and will air on Monday 6th November 9pm on BBC4

REVOLUTION: NEW ART FOR A NEW WORLD was released on DVD 3rd April