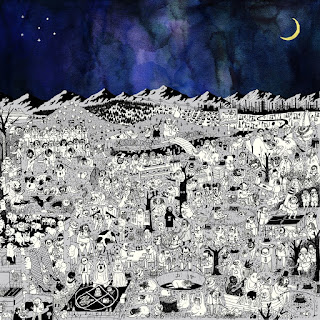 Susan Omand is trying to listen to some new music by randomly picking albums to listen to. Today she gets quite Misty eyed for Father John Misty's new album Pure Comedy...

I didn’t realise new music like this still existed!

I had never even heard of Father John Misty* before I listened to this so I had absolutely nothing to start from – no point of reference, not even genre, so I didn’t know what I was going to get.

No rap. No twangy rock guitar break. No drum machines. Just a very good voice, intelligent lyrics, a piano and interesting orchestral backing. In fact “interesting” and “intelligent” are good adjectives for the whole album as he also manages to build in incredible soundscaping to some of the songs that surprise and delight but don’t pull the listener out of the ambience. I’d recommend giving the album a listen through headphones to get the full effect of some of these.

And his voice, being so front and centre on all the songs, really is beautiful. Clear, pure, mellow, country. I’m going to (probably) commit blasphemy here – he reminds me a lot of Billy Joel or Julian Lennon. There I said it. His voice, and song writing, is that good.

The songs themselves are all what you would probably call ballads but not in the slushy sense of the word. All I mean is they are slow songs, made for listening not dancing. And, for once, I did actually listen to the words of the songs. Usually, for me, a voice is “just another instrument,” another layer of melody. But this time I listened and, then, I went to read them as poetry. The songs are just incredible, full of ironic social commentary and cynical emotional darkness. There’s nothing sentimental, sugar coated, fiery or rebellious. It’s world weary observation at its most beautiful. Just the titles, like “Things it would be Helpful to Know Before the Revolution” or “When the God of Love Returns There’ll be Hell to Pay” engaged me before the songs even started. And then you get to the lyrics themselves. Like this from The Memo:

And I could go on and pull quotes from all the songs on the album. They are all stunning. Like this from the first (and title) track on the album:

Oh, their religions are the best
They worship themselves yet they're totally obsessed
With risen zombies, celestial virgins, magic tricks, these unbelievable outfits
And they get terribly upset
When you question their sacred texts
Written by woman-hating epileptics

When my personal demons are screaming
And when my door of madness is half-open
You stand alongside
And say something to the effect
That everything'll be alright soon, smoochie

If I have one criticism, it’s in the mixing on a few of the tracks. The snare drums are a bit too loud. That’s it. That’s all that I can complain about.

Otherwise, this is a superb album for a relaxed late night with a bottle of wine, because you won’t get anything else done as you will just sit, entranced, for an hour. Listening.

* It was only after I had listened to, and adored, the whole album that I went looking to see who this actually was because, in my mind, it HAD to be someone – talent like this doesn’t just appear out of nowhere. I was right. This is Josh Tillman – an American folk singer/songwriter who has an extensive back career, both solo and with the likes of Seattle indie band Fleet Foxes.