Review - Faberge: A Life of its Own 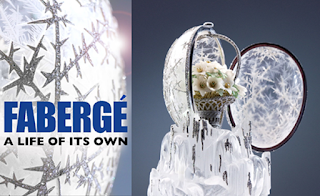 With Easter just around the corner, Susan Omand gets some ideas for presents as she watches the documentary Faberge: A Life of its Own...

A long abandoned dacha (big house) outside St Petersburg is not the place you expect to start a documentary about some of the most exquisite and expensive art in the world – but it is the start, and the end, as treasure seekers have ransacked the place looking for hidden caches. Because this is the “Little Hermitage” and it belonged to Carl Faberge, goldsmith and jewellery designer to the last Tsars of Russia.

And what jewelcraft it was. The documentary covered the full range of Faberge’s designs from his earliest works, influenced by the Green Vaults in Dresden, and how he became popular with the Russian aristocracy due to the opulence and uniqueness of his work, with no two pieces being the same. This also spread through to his Eastern influences, when his work became popular as presents for visiting and visited dignitaries and the Royal family in Siam became avid collectors after a visit there from the Tsar. We saw jewellery, ornaments and trinkets being made, how machine turning worked to put that distinctive circular pattern onto metals and learned the difference between Guilloche and Cloisonné enamelling and why it is so expensive to produce. We saw the beauty of the jewelled and enamelled cigar cases and picture frames, along with the stories behind some of them, and the fun of his menagerie of animal ornaments carved from hardstone minerals, which caused some to think his creativity started to border on “bad taste!” What impressed me most about his work is that, although each piece is very heavily jewelled and crafted from rare and precious metals, it doesn’t feel ostentatious in any way, it doesn’t look garish and each jewel is carefully chosen and placed, there for a reason. As Faberge himself said, “I have little interest in an expensive object if its price is only in the abundance of diamonds and pearls,” and this is proven by the exquisite beauty and great artistry of all his creations. 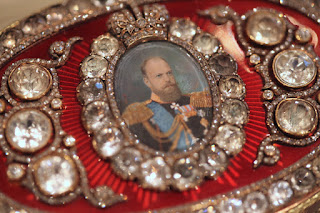 The documentary was not, as I had expected, just about the jewellery though. It gave a captivating insight into Russian culture and the history of St Petersburg as well as the working life of Faberge himself. Archive film, photography and some very pretty caricature drawings illustrated the points about Faberge’s place in the history of Russia and the importance of his design work. It was fascinating to learn about Carl Faberge’s business practises later in his life, when he started delegating the actual creation of his designs to craft masters but, to keep them engaged in the work, he let them both own their own small companies under the Faberge umbrella and put their own initials beside the hallmarks on each piece. More than this though, the documentary follows the business name through the revolution and overseas, looking at its London store and on into America where the name is currently being resurrected to be synonymous once more with quality and elegance by Carl Faberge’s descendants.

However, as one might expect, the highlight of the documentary for me was seeing just a few of the fifty Easter Egg gifts that Faberge created for the Russian royal family. Each is, in their own way, utterly beautiful. From the very first egg produced in 1885, a white enamel on gold Hen Egg, to the discovery of the unfinished 1917 egg, it was clear that each piece was lovingly created for each recipient, with many personal touches, such as enamelled portraits, astrological symbols picked out in diamonds and the influence of places near and dear to the family. It is worth watching just for the moment that The Winter Egg, created by one of the only female designers in the Faberge house, in rock crystal with diamond ‘frost’, opens to reveal its surprise inside.

It kinda puts my own planned Easter present of a Cadbury’s Mini Eggs mug into perspective though, doesn’t it?

Fabergé: A Life of its Own will be released on iTunes, On Demand, DVD and Blu-ray from 10 April