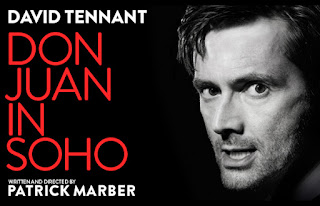 Tony Cross went to watch Don Juan in Soho at Wyndham's Theatre (not in Soho)...

Don Juan in Soho is adapted from Molière’s 'Don Juan' by Patrick Marber. The only two things I know about Patrick Marber is that he's the author of 'Closer', which I loathed and that he's been the butt of several jokes by Lee and Herring, who don't appear to like him very much.

Don Juan - in case you didn't know - is the unrepentant lover. He adores being who he is. He loves his life. He sees himself as the moral centre of the universe. Everyone else is a hypocrite. Basically, he's a horrible heart breaking spoiled brat. A one-man Bullingdon club.

And yet there's something appealing about him. He's utterly aware of who he is and what he's capable of sinking to, which means he isn't a hypocrite. And as he dies we're not quite sure whether his punishment is deserved or not. His refusal to repent is heroic.

A lot of this is extremely funny. Sometimes darkly so. Sometimes broadly. And I'll have to admit that Tennant's performance leans to the broad but how the hell do you play Don Juan without being broad? He's not a man of subtleties. He's a man of moments. He's a rolling set of nows. (This may be the most pretentious sentence I have ever written and that's saying something.) I thought Tennant was fabulous. The woman on the stairs leaving the theatre thought he was terrible. It's all a matter of opinions, which I realise would make this version of Don Juan hate me with a passion. Everyone wants to be heard in the modern world and he wants us all to shut up.

Tennant is magnificently supported by Adrian Scarborough as Don Juan's poorly put upon servant Stan. Scarborough is a brilliant actor with fantastic comic timing. I'd watch him in anything. There's a lovely moment when DJ and Stan sing and dance together, which is both sweet and funny.

Gawn Grainger plays DJ's father, which is something of a one note role. He gets one long, rolling speech and a couple of bits and bobs. Then Danielle Vitalis does a great job as the innocent, beautiful and betrayed Elvira. Also worthy of applause is Mark Ebulué as Aloysius, Elvira's murderous brother. I saw Ebulué as a brilliant Othello in a Frantic Assembly production at the Lyric Hammersmith and I think he's an exceptional actor looking for a big break.

So, I enjoyed this immensely. Funny, smart and dark. Short and sweet too at only just over two hours, including an interval. Plus, I was sat in the cheapest of cheap seats and I still got to see most of what was happening on stage without difficulties, which is always a pleasant surprise.

This story is, of course, also known – possibly better known – as the opera Don Giovanni. I saw the ENO’s new production of Don Giovanni in October 2016, which I think is the best version of the story I’ve seen so far but this is well worth seeing if you get a chance. Just don’t expect too much subtlety.