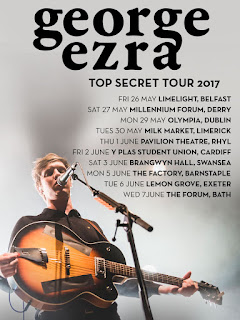 Question - How can a tour be "top secret" if you announce all the dates and places? George Ezra has announced his Top Secret tour...

Remember George Ezra? He's the one that sounds like Rag n Bone Man but from three years ago... no? Remember the Budapest song? Still no? Blame It On Me? Ah. Yeah, him. Anyway, yesterday on his Facebook page he announced a top secret tour.

Starting on May 26th he's playing 3 dates in Ireland, 3 in Wales and 3 in the South West of England, before hitting the festival circuit through the summer, including TRNSMT, Glasto and V.

Tickets for this Top Secret tour go on sale from Friday but pre-sale tickets are available from tomorrow morning.

He ends his "invitation" with "So come and join George Ezra’s TOP SECRET tour! But don’t let the cat out of the bag - this tour is top secret…"