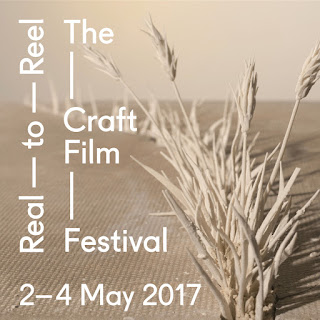 The film festival dedicated to craft and making, Real to Reel: The Craft Film Festival,  returns to Picturehouse Central from 2 - 4 May...

Launched by the Crafts Council and Crafts magazine in 2016, the first year of Real to Reel was a sell-out show and this year the festival returns to Picturehouse Central with a typically eclectic programme on the evenings of 2, 3, and 4 May during London Craft Week 2017.

As before there will be a carefully curated programme of different films shown each night including comedy, documentaries, animations and profiling makers such as Kate Malone, Simone ten Hompel and Martin Clark. Following an open call, 44 films have been selected from nearly 300 submissions, covering a range of styles from animation to satire, from documentaries to surreal art pieces. As diverse as the films are, each looks at our relationship with materials and making in different ways.

Annie Warburton, Creative Director, Crafts Council said,"We're thrilled to be bringing Real to Reel back to PicturehouseCentral for a second edition. Building on the popularity of the festival's debut in 2016, this year there's even more to see with an expanded programme over three nights. Craft and making have never been more popular - and these films reveal the tender, human, sometimes comic, stories behind the objects that fill our world."

Grant Gibson, the Editor of Crafts magazine added "To my mind Real to Reel has rapidly established itself as one of the most important events at London Craft Week and I'm delighted by the shape the programme has taken. There's a fascinating combination of techniques and narratives which run the gamut from heritage craft to cutting edge making, all of which should make for a hugely enjoyable three evenings."

Highlights include Terraforming, directed by Juriaan Booij, which transports you to a crystal planet; In the Meadow, an enchanting animation by ceramist Katie Spragg, exploring the qualities that grass and clay share; and a short film from the Made in London series by William Scothern which takes you behind the scenes of rug maker Ruth Scott's house.

Further highlights will be:

The Craft of Carnival, Benjamin Wachenje's film, commissioned by the Crafts Council, which illustrates the making that goes on behind the Notting Hill Carnival.

The Craft of Sound by Alex Bishop, which follows Bishop through the construction of his unique hand-built guitars.

The Glass Party Popper by Dominic Wilcox, which shows us the journey the inventor takes to design a glass party popper to usher in the new year.

The Big Cloth by Nick David and Jack Flynn, a short documentary about the Harris Tweed industry on the Island of Harris and Lewis in Scotland. Harris Tweed is the only cloth to have its own act of parliament protecting the industry.

Visit the website to see the full programme and book tickets.