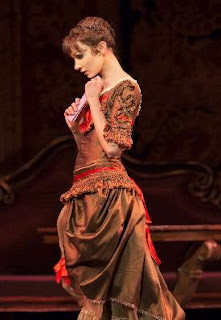 Extreme passion and desperate acts are promised in Kenneth MacMillan's gripping ballet, Mayerling, as it returns to the Royal Opera House this month...

Mayerling is regarded by many as choreographer Kenneth MacMillan's greatest masterpiece. Inspired by true events, the three act ballet explores the darkest reaches of human experience and is regarded as one of the most demanding, complex male roles in the repertory. The ballet follows the true story of the suicide pact between the heir to the Austro-Hungarian Empire, Crown Prince Rudolf, and his teenage mistress, Mary Vestera, in 1889.

MacMillan’s choreography balances the large-scale – the pomp of a royal wedding and the splendour of a ballroom – with intimate scenes and an eagerness to push the boundaries of classical ballet. The role of Rudolf, the deeply disturbed Crown Prince, is one of the most demanding ever created for a male dancer. His psychological and emotional decline is charted in a series of shockingly violent pas de deux with the women in his life: his mother, his unhappy bride and his young mistress, the obsessive Mary Vetsera.

Debuting in the role of Crown Prince Rudolf will be Federico Bonelli and Steven McRae, with Lauren Cuthberson, Sarah Lamb, Laura Morera and Natalia Osipova dancing the role of Mary Vestera for the first time during this run.

The music of Franz Liszt, arranged and orchestrated by John Lanchbery, provides a sweeping soundscape to match the high emotion of the drama, while the designs of Nicholas Georgiadis conjure up the privileged and oppressive society of the Austro-Hungarian court.


Mayerling by The Royal Ballet runs from 28 APRIL—13 MAY 2017 at the Royal Opera House with tickets starting from as little as £4. For more information and to book tickets, please visit the website