News - Kooks on the Radio 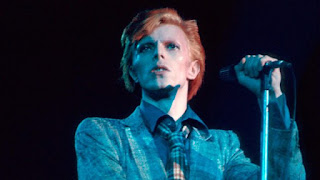 A rare alternative version of David Bowie’s much-loved song Kooks from the 1971 Hunky Dory album is to be given its first official radio play by Rick Wakeman on Monday...

As well as playing piano on the original recording of Kooks, Rick also played on this alternative version. The track is taken from the rare Hunky Dory era promo album BOWPROMO1, which is being released on 22rd April on limited edition vinyl to commemorate the tenth anniversary of Record Store Day.

BOWPROMO1 was originally pressed in very small quantities in 1971 and features alternate versions of songs that would later be heard on Hunky Dory. It is often referred to as the BOWPROMO white-label album, as its matrix number (BOWPROMO 1A-1/1B-1) was the only way to identify it. The exact number pressed at the time is unknown but is most certainly less than 500.

On the show Rick reveals this is also the first time he has heard this version of Kooks since recording it, and also shares his memories of the sessions at Trident studios and the Trident piano used for the recordings.

Rick Wakeman says: “I must have played on 200 sessions and I can recall some of them. I remember the ones that were just so special and Hunky Dory is definitely among them. I played on Quicksand and Kooks. Here is an alternative version of Kooks and believe it or not, this is the first time I’ve heard it too!”

“This piano just recorded sensationally. It was a semi-closed, cloth over the top, which the engineers used special mics for. For whatever reason, they just got the most fantastic sound. And everyone who wanted a piano based track wanted to use it. David Bowie used it an awful lot. I did tracks with Marc Bolan there, I did Al Stewart tracks there.”

“The reason that it was such an interesting sound was that the piano was just at the right age. The hammers, where they are soft when they are brand new, had slowly worn down so they didn’t sound brittle or nasty; it was just that lovely in between. There were two to three years where the Trident piano was at its absolute best and people paid premium money to go in there and use it. It was a joy to play on.”

During the show Rick Wakeman also plays some of his other favourite and notable keyboard tracks. He is joined at the Radio 2 Elton John piano by his son Adam, who will discuss his father's influence on him and his own work with Black Sabbath, Annie Lennox, Will Young, Atomic Kitten, Travis and 10cc, amongst others.