News - The Barrel Headlong into the Night EP 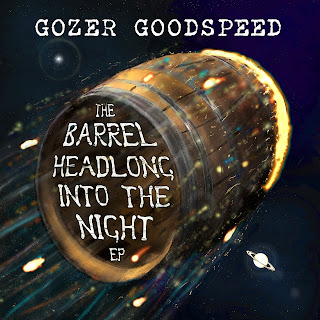 The indie blues/folk singer-songwriter, Gozer Goodspeed has announced the release of The Barrel Headlong into the Night EP next month...

Moving on from the bare-acoustic-bones feel of his first release, The Rattlebone Colour EP (see Steve's review of that here), this time we're promised a fuller, richer, more exciting sound as The Barrel Headlong into the Night EP adds numerous extra musical elements. If you were a fan of his first EP though, he insists that he's not losing his roots - "this is still a raw-edged, all-acoustic affair, and the whole EP was still recorded using live takes of the guitar and vocal parts in order to capture the maximum possible energy for each song. But now you're going to hear the likes of mandolin, piano and percussion elements rounding out the sound too, and I couldn't be more thrilled to be putting these new tunes out into the world."

Fans will also be treated to a new song or two being released ahead of the EP itself, scheduled to come out on 19th May - check local radio for some big reveals very soon - and we'll have news on those and a review of the whole EP soon.

Tracklist
1. Barrel Headlong into the Night
2. What You Got Going On, Lewis?
3. Far Away, Blissed Out & Free
4. Every Night, Saturn's Rings
5. When the Blue Man Met the Headshrinker