Turn That Noise Down - Prince, Sign o the Times 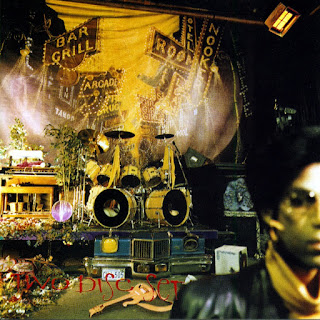 So many well-known albums turn 30 this year and Steve Taylor-Bryant and Susan Omand travel back to 1987 to revisit some of the sounds of their youth that made parents shout "Turn that noise down!" This week, Susan Omand remembers Prince and Sign o the Times, released in March 1987...

“You turn on the telly and every other story is tellin' you somebody died...”

Contrary to just about everyone else, this was the one that hit me hardest in the Year of Death that was 2016. I don’t think I’ve fully accepted it yet. I’ve always loved Prince in all his guises - squiggle, Tafkap and all. His music was the first that I “discovered” for myself, with his album 1999 released in 1982, without someone else pointing it out to me, hearing it because my parents played it or trying to fit in with the cool kids in school by emulating their tastes. Purple Rain, from the album of the same name, is still far and away my favourite song ever and signifies so much for me. Throughout his music career Prince was all about the different, the experimental, trying new things, pushing boundaries, with an unapologetic ego far bigger than his 5 ft 3 slight frame. He was afraid of nothing and nobody and did what the hell he wanted, how he wanted to and I think that’s what I liked most – that show-stopping attitude (and the purple sparkly Cuban heels).

Sign o the Times as an album epitomised that attitude. A double album released in March of 1987, it was his 9th studio offering and the first away from The Revolution. Instead there were drum machines, state of the art digital samplers and electronically altered vocals. This was music at the cutting edge but it still maintained that distinctive “Prince” sound of vibrant brass and dirty bass that complemented his voice so well. And what a voice. If you were being hyper-critical I guess you would call it a bit shallow and breathy but, for me, that just made the sound even more unique with a dangerous seductiveness oozing over even the brashest of bombastic backings – even if you didn’t listen to the sexually explicit lyrics that populated much of his work, oh hell, you knew the game was on with Prince.

Listening to the album again now, 30 years on, it’s so eighties it hurts. The music is neon colours, big hair, shoulder-pads and Keytars. The lyrics encompass the excess, the deep desire, the full on desperation, of a time that shouted “live for today because there is no tomorrow.” There is the prophetic feel to the title track, one of four singles from the double, showing that the more the world changes, the more it stays the same. And that sense of contrast carries on through the album. The brightness of Starfish and Coffee side by side with the languid, almost melancholy, sensuality of Slow Love. The blaring Latino brass and thumping techno subversiveness of Hot Thing set against the commercialism of his duet with Sheena Easton with U Got The Look. Some songs, like Forever in My Life and the wonderful The Cross are just voices and an electronic back line, others are highly polished, orchestrated and produced like the single If I Was Your Girlfriend. But, even though the album screams eighties, it’s all music of its time rather than feeling dated. The unashamed pop of the album stands up very strongly against the manufactured pop of today and you can hear the influence of this era of Prince’s work in so many music genres since, in ideas and feelings as well as covers and samples. This is because Prince always was, and is and will be, so varied and different to anything else.

Even though it’s now nearly a year on from his death, there’s now rumour of new music to come as the archives are opened up and his extensive back catalogue is slowly becoming available for streaming, I can’t help but feel there is still a silent purple void in my universe. Remembering Sign o the Times with a smile goes some way towards filling it.