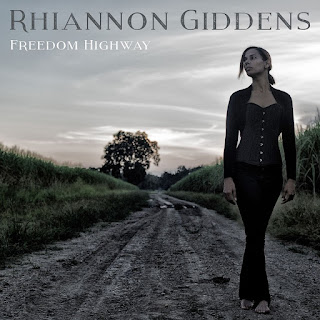 Susan Omand is trying to listen to some new music by randomly picking albums to listen to. Today is the turn of the new release from Rhiannon Giddens, Freedom Highway...

Well, imagine no longer and discover the work of Rhiannon Giddens. In my quest to listen to new music, her album Freedom Highway was my random pick of the week's new releases. Prior to last Friday I didn’t even know her name or what genre of music she sang, never mind being a fan of her work, so I count this as very much a lucky punt. I just didn’t fancy any of the other Featured New Releases this week on "tech term streaming thingie" and I liked the look of the cover art, which proves just how important a great cover image is, so gave it a shot.

It is well known that I am not usually keen on the female non-classical singing voice but the three I will listen to has just become four as I love the unique quality of Rhiannon’s voice. I likened her to Kate Bush at the start of this article and that is indeed who she reminds me of, Kate back in the days of Wuthering Heights and Cloudbusting, with the superb range and tonal quality in her singing, but Rhiannon has an added richness and control of power that Kate didn’t quite get, and a very individual sound. And the music is, of course, totally different.

The songs on the album, except one, are all stunning. They’re good old fashioned sounding melodies with powerful words, simply and beautifully sung and backed by a “proper” country band of fiddle, banjo, piano and an acoustic backline of light drums and rhythm guitar. The styles range from blues and jazz to gospel and country and the odd addition of muted jazz trumpet, steel guitar, or even full-on gospel organ and choir as the tracks allow, adds a depth and richness that just enhances the overall sound.

The track that doesn’t quite work for me on the album is, ironically, titled Better Get It Right The First Time. It’s still OK, don’t get me wrong, and the lyrical message is a strong one, but the over-orchestrated brass, hip-hop bass and guest rapper were totally incongruous with the rest of the album. It honestly felt like she was told to do something “to appeal to the modern market” and be a commercial draw to get people to listen to the rest of it. The track is on auto-skip on my streaming thingie now so that it doesn’t spoil the rest of the album for me but, I guess, that’s just me, others may really like it.

Other than that one (forgivable) issue, I find it very hard to fault this album at all. The music styles sit well together and really showcase her unique voice. I was surprised, on doing some more research, that 9 of the 12 songs on the album are new compositions, rather than old songs I didn’t know, as they work so well with the traditional and civil rights protest song feel of the three songs I had heard others do before. The new songs, mostly, have a rawness, a history, an intensely personal edge which, when coupled with her unique voice and the traditional instruments, give them a timeless quality that is lacking in many current releases.

I realise that I’m not going to be this lucky with all of my random pick new music but, in this modern musical world of drum machines, autotune and manufactured pop, I’m relieved to discover that real, unique, singers such as Rhiannon Giddens still get some recognition. Here’s the first track on the album and the one that got me hooked.