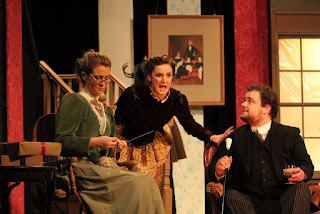 On until 11th at the Cheltenham Playhouse, Robert Barton-Ancliffe watched a new amateur production of Ibsen's ground-breaking play A Doll's House...

This week sees the premiere of a new production of Henrik Ibsen’s momentous play ‘A Doll’s House’ at the Playhouse in Cheltenham. A frank depiction of the inner workings of married life and the theme of women’s liberation caused uproar on its premiere in 1879. While this subject matter was enough to shock conservative theatre-goers at the time, even today the play has lost none of its emotional impact, particularly when handled as masterfully as in the Playhouse Company’s new production.

The drama centres on Nora, who lives a seemingly idyllic life as wife and mother in a middle class household. Her husband Torvold has just received a promotion at the bank and despite his mild protestations, obviously dotes on her. As we spend more time with Nora and the characters who pass through their household however, the façade unravels and we witness how her true passions and good intentions are thwarted at every turn and she is seemingly set on a collision course with tragedy.

It is obvious from the beginning that director Gwenefer Roskilly’s vision is something special. The play’s title ‘A Doll’s House’ offers an obvious cue for potential set and costume designers but save for a single antique Doll atop the upright piano, they have resisted the temptation here to milk the potential for symbolism too far. As the lights fade up, rather than a closed space, the wonderfully deconstructed set offers simple hints of a comfortable and well-kept home, with sections of papered walls hanging freely from the ceiling and decorating the flats, leaving plenty of gaps exposing the blackness of the stage. The furniture is present but not overbearing, and in a particularly nice touch, the fireplace is simply conveyed by some twinkling footlights, bringing the central feature of the living room out to centre stage, allowing the actors to draw closer to the audience. The overall effect is not to expand the space in which Nora is confined, but more to draw the audience into her world, and what a world it is, with everything from the lighting to the simple yet authentic costumes feeling like parts of a single artistic statement.

Maria Mariott’s performance as Nora perfectly complements the character’s duality, and considering that the all of the drama unfolds in a single room, is remarkable in its physicality. Maria portrays Nora as a bundle of nervous energy, turning on a dime between irrepressible excitement, heartache and terror and while Nora’s story is always heading in the same direction, the performance here is never less than engaging. This aspect alone of Maria’s performance would worthy of praise on its own, but it is in the play’s infamous final scene and her confrontation with Torvold that cements her portrayal of Nora as something truly special. As she reappears for the final time, dressed down and free of self-doubt, the transformation is remarkable. Gone is the barely contained restlessness, transformed into self-confidence and steely resolve. Maria’s intensity finds a perfect counterpoint in the studied calm of Oliver Bradovich and Anna Lambert who portray husband Torvold, and Nora’s old friend Christina respectively. 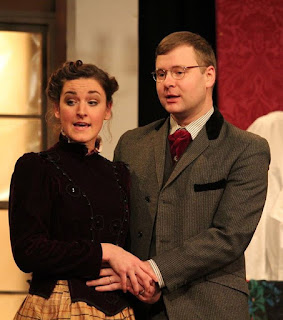 The character of Torvold is not a monster per se, but even the most benevolent of husbands of Ibsen’s time would cast a dark shadow by today’s standards. Torvold’s assumed ownership of Nora alone is enough material for the right actor to create something interesting and Oliver walks this line masterfully, infusing a performance full of outward charm and tenderness with just enough hints of menace to keep the audience guessing as to what really lies beneath the surface. Anna too, as the cold, practical Christina, the opposite of flighty Nora, has a vivid presence, her voice and manner at all times commanding, with only her facial expressions providing subtle hints of a lost soul beneath the bravado.

One of the delights of Ibsen’s cast of characters, even the smaller parts, is in their relative complexity and the supporting cast too brings an impressive range to proceedings. Lloyd Spencer, as the supposedly dying Dr. Rank cuts a sympathetic figure, but his performance is an honest one, never once played for sympathy and mercifully free of melodramatics. The same too can be said of Ryan Pullen as the de facto antagonist Krogstad. There is one genuinely chilling moment as he circles Maria’s Nora like a jackal seemingly intent on collecting his debt at any cost, but the light and shade Ryan throws at the part keeps the audience guessing, heightening the already mounting tension. Rosalind Richardson, Jan Uzzell and Kishi de l’Allebone bring remarkable presence to the minor roles, each providing their share of memorable moments given their brief time in the spotlight.

It is the sheer amount of thought that has gone into this production that sets it apart from a lot of classic revivals. The production team and cast have not relied on gimmicks to try and hook a modern audience, what they have done here is bring a complex, challenging piece to full blooded life, with an abundance of care and passion, transforming what seems dry and didactic on the page into sparkling, compelling theatre. Perhaps the most ringing endorsement one can give is that given that the play runs for 3 acts, this is one of those rare performances that will keep the audience engaged for every minute of its near 3 hour run time. If this review has hinted at a production full of subtlety and surprises, please go and see for yourself. There is more to discover here than these simple words can convey.

‘A Doll’s House’ is an amateur production and runs until Saturday the 11th of March at the Cheltenham Playhouse. Tickets are £11. To book tickets, call the box office on 01242 522852 or book online at http://www.cheltplayhouse.org.uk.

Images - courtesy of Trevtography
Email ThisBlogThis!Share to TwitterShare to Facebook