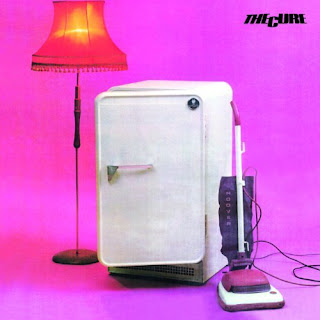 Marc Nash listens to Three Imaginary Boys... No, not the voices in his head, the debut studio album by The Cure from 1979...

Remember the self-proclaimed lo-fi genre of the late 80s early 90s, bands such as Pavement and Sebadoh? Well Robert Smith and The Cure got there a decade earlier with their album Three Imaginary Boys. What could be more callow than taking the set text from your recently completed A-Level French and turning it into a song “Killing An Arab”? Or there you are stuck in the studio needing to come up with a new track, picking up the Tate And Lyle sugar pack as you’re drinking your tea and reading the details of how to apply for a free icing tool and then setting that to music “So What?” not even omitting the exact closing date for applying which has stuck in my mind some 38 years later. There’s a cover version of Hendrix’s “Foxy Lady” which is unrecognisable from the original as any good cover should be, principally down to Robert Smith’s deep South (England) drawling vowels. It ought to be pointed out that “Foxy Lady” was just a band soundchecking in the studio and never intended to be part of the album, but the record label put it on much to Smith’s chagrin. He was never to surrender artistic control again, which in light of the Cure’s future output was a pity. Apparently the front cover was not Smith’s choice either, which is amazing as in another article for AlbieMedia (here) I convey upon it the status of being my favourite album cover of all time.

The album is offbeat, charming and yes, lo-fi. That’s not to say it doesn’t have some excellent guitar playing, since Smith is a guitar whizz with oodles of reverb and echo, but held in check by a tight rhythm section. Unlike Gang of Four, the Fall or Public Image Limited, this record is readily accessible. It’s non-conformist musically, but it’s not abstruse. But for me ultimately it’s the strength of its individual tracks. It starts with “10:15 Saturday Night”, which was the B-Side to their debut single “Killing An Arab”. What band open their debut album with a B-side? And then don’t put the A-Side anywhere on the album at all? Then comes my favourite track “Accuracy”, a song about a couple failing to communicate, with the pleasingly lyric delivered almost pleadingly by Smith, ‘Kill you without trying/ That’s ac-cu-racy’. There is edge in some of Smith’s words, such as in the song “Meathook”, ‘He really stole my heart/ Hung me up on a meathook/ A real piece of/ Slaughterhouse Art’. Ugh and that’s an image that has stayed with me and which I’ve employed in my own work. And to cap it off, a hidden bonus track in which The Cure sort of play themselves off stage with a coda. If you have never heard this album and are keen on tracking it down, try and get hold of a version that includes their superlative early singles such as “Killing An Arab”, “Boys Don’t Cry” and “Jumping Someone Else’ Train”.