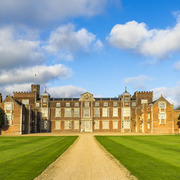 Bitesize opera is heading to Hull next week as Opera North helps Burton Constable Hall celebrate its 2017 season opening with a performance of Whistle Stop Opera: Hansel and Gretel...


The Whistle Stop format was originally devised to take opera away from the stage and into a wide variety of community and other settings. It reaches the Great Hall at Burton Constable Hall, Skirlaugh, tomorrow evening after performances earlier in the day at Bude Park Primary School in Bransholme and Thornton Church Community Centre on the Thornton Estate.

Whistle Stop Opera: Hansel and Gretel is a light-hearted, half-hour version of one of the best loved works of Engelbert Humperdinck (no not the singer from the 1960s/70s that sang Please Release Me, the German composer from the late 19th/early 20th century.)

Written by opera singer and director John Savournin, with co-direction from Opera North’s Community Engagement Manager, Madeleine Thorne, this new adaptation is sung entirely in English. It explores the characters and themes from Humperdinck’s best-loved work, which was inspired by the Brothers Grimm story of two hungry children lost in the forest and unable to resist the wicked witch’s gingerbread house.

John Savournin also appears in the role of the Sandman, encouraging the audience to use their imaginations to help him weave his ‘daydream’. He is joined by soprano Ellie Laugharne as Gretel and mezzo-soprano Heather Lowe as Hansel, with Sarah Estill, who is more usually to be found singing in the Chorus of Opera North, taking on the dual role of the children’s mother and the witch. Accordionist Miloš Milivojević provides the musical accompaniment, based on Humperdinck’s charming melodic score.

Jacqui Cameron, Opera North Education Director, said “We’re delighted to have been invited to join Burton Constable Hall in launching their 2017 season, particularly during Hull’s City of Culture celebrations. Whistle Stop Opera is the perfect way for people to give opera a go for the first time as, with the interactive performances being held in more intimate settings, it enables the audience to get much closer to the singers and to fully appreciate the power and range of their voices. We’re also inviting people to join us for a special Q&A session after the performance to give everyone the opportunity to find out more about opera and what it’s really like to be an opera singer.”

Whistle Stop Opera: Hansel and Gretel builds on the success of last year’s Whistle Stop Opera: Elixir of Love and is being performed to coincide with Opera North’s current fairy tale season which includes Humperdinck’s Hansel and Gretel, Rimsky-Korsakov’s The Snow Maiden and Rossini’s Cinderella (La Cenerentola). Tickets cost £15 per person which includes a complimentary drink and an exclusive preview tour of the historic house before it opens its doors to the public in April. The Whistle Stop performance starts at 7pm with the house tour planned for 8pm.

This year also marks Opera North’s return to large scale opera performance in Hull, with confirmed dates in the city including Puccini’s Turandot at Hull City Hall on Tuesday 9 May, and The Little Greats, a season of one act operas including Leoncavallo’s Pagliacci and Leonard Bernstein’s Trouble in Tahiti, at Hull New Theatre from 26-28 October. The Company is also producing a new sound installation for the Humber Bridge, The Height of the Reeds, as part of the Hull 2017 UK City of Culture programme, opening 1 April. Tickets for all events are on sale now.