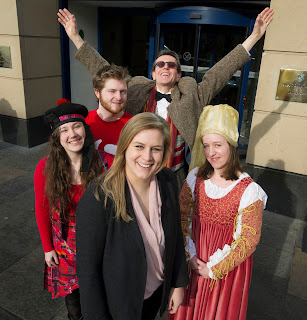 A fixture of Edinburgh Fringe in recent years, our friends at Sweet Venues are expanding in partnership with Macdonald Holyrood Hotel...

Sweet Venues’ growing reputation as a performer led venue, which focuses on the overall experience of both performer and audience member has contributed in recent years to an explosion of applications to be part of what Sweet’s Artistic Director and co-owner JD Henshaw affectionately calls the, ‘Sweet Family.’

In this, Edinburgh Festival Fringe’s 70th Anniversary year, the demand from performers across the world has driven Sweet Venues to expand their EdFringe offering to multi-site, nearly doubling the overall capacity of Sweet Venues.

JD Henshaw said, ‘We started out at EdFringe as performers. Just like many performers, we had some great experiences and some not so great experiences. I knew that we could run a venue that would offer a boutique, high quality Fringe experience appealing to the performers and audiences that travel to Edinburgh from around the world every August. This new partnership with Macdonald Holyrood Hotel will help us to keep doing that for an ever-increasing number of people.’

Based in Dundee, Sweet Venues ethos is rooted in the open access nature of EdFringe. Sweet co-owner Annie Marrs, continued, ‘EdFringe is the greatest show on earth and we truly believe that. We also believe that it should be as accessible for performers and audiences as possible. In Macdonald Holyrood Hotel we have found a company who share that ethos alongside a destination which perfectly fits the standards of Sweet’s EdFringe model.’

Stuart Douglas, General Manager at Macdonald Holyrood Hotel, said: “During the Fringe, Edinburgh comes to life. Performers and visitors travel to the city from all over the world. It’s a great privilege for Holyrood to be a venue for the Fringe, and we hope that it is the first of many similar occasions with Sweet Venues. The hotel is ideally-located for revellers, at the foot of the Royal Mile, a must-see for visitors to the city.”

Sweet Holyrood, will house three new performance spaces, a dedicated box office, and foyer café bar. Open from 11am – 11pm throughout the festival, the programme will comprise of Sweet’s eclectic mix of theatre, music, spoken-word, cabaret and comedy. It will also be the home of a new Sweet co-production of a 250 hour interactive gaming marathon including the audience as participants and spectators.

Returning Sweet performer Michael Daviot (five star, award nominated Nosferatu’s Shadow) pictured, said of the venue, ‘Sweet are the friendliest, most enthusiastic and most supportive venue on the Fringe. I don’t get up this early for anyone else!’