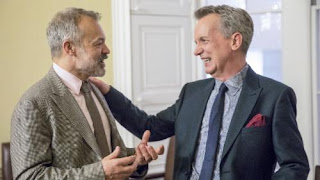 Sky Arts' Portrait Artist of the Year for 2017 has been announced (major spoiler!)...

Artist Gareth Reid has been crowned as the Sky Arts Portrait Artist of the Year 2017, winning a career-changing £10,000 commission to paint TV presenter and comedian Graham Norton, which will hang in The National Gallery of Ireland.

Gareth beat 54 artists from the UK and abroad to win the hit show, which is presented by TV personality and comedian Frank Skinner alongside presenter and journalist Joan Bakewell, a leading figure in the arts for nearly six decades.

One of hundreds to originally enter the competition with a self-portrait, Gareth won his heat in week six of the show with his portrait of TV presenter Adrian Chiles, before again impressing the judges - artist Tai Shan Schierenberg, independent curator Kathleen Soriano and art historian Kate Bryan - in the semi-final with his portrayal of award-winning actress Imelda Staunton.

In the final, Gareth, who is originally from Belfast in Northern Ireland but now living and working as an artist in Glasgow, demonstrated his skills with two pieces: a detailed portrait of actor Tom Courtenay completed in charcoal, watercolour, pencil and pastels and a commissioned portrait of The Hon. Mrs Justice Cheema-Grubb, a judge of the Queen's Bench Division of the High Court of Justice of England and Wales, and the first Asian woman to serve as a High Court judge in the UK. Gareth's opponents in the final were Kimberly Klauss, an American artist living and working in London, and Liam Dickinson, a Lancashire painter. 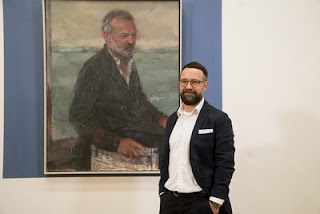 As well as winning the competition, Gareth was surprised to discover he is a distant relative of Graham, as Gareth's great grandmother and Graham's great grandfather were siblings. The happy coincidence was only revealed when Gareth met Graham for the first time to begin painting his portrait, and their conversation revealed they both had family from the Northern Ireland town of Ballymena.

Speaking about his newfound cousin, Gareth says: "My dad knew there was some connection a while back but only decided to tell me about a week after the final when we were in Kerry together. It was vague at that point - some cousins of his thought there was a connection through my granny's side. I still can't quite take in the chances of me, out of all the people who entered, getting the opportunity to paint Graham, out of all the people they could have chosen, and it turning out we're third cousins. As Graham aptly put it, "I'm embarrassed for Ireland". He is genuinely a lovely guy and he took [my partner] Suzy and me out for dinner after the unveiling."

And on winning, Gareth says: "It's great to receive the affirmation of the award, but I know that on another day it could have easily been someone else so I feel, as ever, very lucky. There was so much serendipity involved - for a start having Adrian as a sitter, who was perfect for what I wanted to do, then getting Bobbie Cheema-Grubb as the final commission was a total gift. I couldn't have asked for a better match.

"The most important thing for me was the privilege of having a painting in a national public collection, but the thing you just can't buy is the exposure on this scale. For years you do the work and it's a very slow and often frustrating process getting it out there. But a big prize, especially a televised one, will definitely help the cause. We'll wait and see how it goes."

Portrait Artist of the Year was produced by London and Glasgow-based independent production company Storyvault Films, which also produces Sky Arts Landscape Artist of the Year. This series featured 20 celebrity sitters across six heats. Each was able to choose their preferred finished portrait to take home - regardless of whether that artist went through to the next stage.

All six heats and the semi-final were filmed in the courtyard of the Wallace Collection in London's Manchester Square, home to one of Europe's finest art collections. The show's grand finale took place at the National Portrait Gallery.