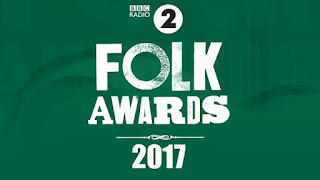 The full lineup of performers for the 5th April show was also revealed along with news that the awards will be broadcast live on BBC Radio 2 as always but there would be an additional hour-long televised highlights show on BBC Four on Sunday 9th April. The Awards, now in their 18th year and one of folk music’s annual highlights, sees some of the biggest names celebrate the UK’s thriving folk scene.

Cassian Harrison, Channel Editor, BBC Four, said, ‘I’m delighted that BBC Four will be broadcasting highlights from this year’s Radio 2 Folk Awards. BBC Four is the home of music on BBC television, and we look forward to celebrating some brilliant folk artists and terrific performances.’

Alongside receiving a Lifetime Achievement Award, the evening will see American musician and songwriter Ry Cooder take to the stage for a rare UK performance. A career-long champion of folk music, Ry is renowned for his inspired slide guitar playing. Through his own work and collaborations with others, he has explored and supported a wide range of musical cultures, from Tex-Mex to Irish folk, and West African blues to Indian classical music.

Al Stewart will also receive a Lifetime Achievement Award for his contribution to folk music and is another of the evening's performers. Al started his career on the 1960s London folk scene, where he performed alongside Bert Jansch, John Renbourn, Roy Harper and Richard Thompson. Appearing at the first Glastonbury Festival in 1970, he became known for his brand of folk-rock, which he combined with tales of characters and events from history.

Shirley Collins MBE - nominated for two Radio 2 Folk Awards, Best Album and Folk Singer of the Year - will perform a track from her comeback album, Lodestar. One of the great English traditional singers, Shirley was one of the key voices of the UK folk revival from the late 1950s to the 1970s. She recorded a host of classic EPs and LPs as a solo singer, as well as with her sister Dolly and in collaboration with musicians like Davy Graham.

Also performing live are young Dublin singer Daoirí Farrell, who has quickly become one of the most talked-about acts on the Irish and UK scenes, and singer and instrumentalist, Jim Moray, who has been at the forefront of contemporary English folk music since emerging as a fresh presence in the early 2000s.

The Folk Awards will also feature a specially curated performance of The Ballads Of Child Migration, which is dedicated to victims of enforced child migration. Between 1863 and 1970, over 100,000 children were sent from Britain without parents and without choice to supposed new lives in Australia and Canada. ‘The Ballads Of Child Migration’ tells their story. It will feature the voices of former child migrants, narration by Barbara Dickson and original songs performed by Kris Drever, Jez Lowe, While & Matthews, Boo Hewerdine, O'Hooley and Tidow, John McCusker, Andy Cutting and Mike McGoldrick.

Plus legendary performer Billy Bragg will headline with a tribute to icon Woody Guthrie, as 2017 marks the 50th year of his passing and he is inducted into the Radio 2 Folk Awards Hall of Fame. Billy, a long-time admirer of Woody, has been a brilliant and distinctive voice in British music since he emerged on the scene during the punk era.

Opening the show is a performance from Afro Celt Sound System. The cross-cultural musical group fuse modern electronic dance with traditional Irish and West African music. Plus Orkney group, Fara, who bring together four emerging musicians at the forefront of the young Scottish folk scene.

The Radio 2 Folk Awards will be broadcast live on 5th April on BBC Radio 2 from 7.30 – 10pm and can be watched live online at bbc.co.uk/radio2.

Drivetime presenter Simon Mayo will be broadcasting a special programme live from the Royal Albert Hall (5pm-7.30pm) on the day of the awards.

The interval show, hosted by Kathryn Tickell – an acclaimed performer of the songs and smallpipes of Northumberland – will feature performances from the nominees for the Young Folk Award 2017.

Tickets for this year’s event are available now from bbc.co.uk/radio2
Image - BBC
Email ThisBlogThis!Share to TwitterShare to Facebook