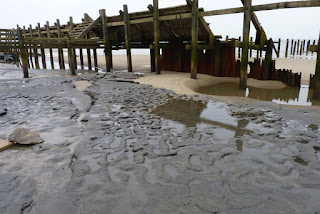 Humanity has moved across the globe for a million years and more. Its footprint is ever changing. A new display at The British Museum charts Three Journeys...


This latest Asahi Shimbun Display focuses on the complex and emotive theme of migration and its life-altering power. Moving stories: three journeys addresses migration by focusing on the million year-old story told in footprints discovered at Happisburgh in Norfolk, and a story of exile in the contemporary work Ali’s Boat diary 1 by Iraqi artist Sadik Kwaish Alfraji. To help frame these journeys, the display includes excerpts from the poetic documentary, One World in Relation, directed by Manthia Diawara. The film follows Édouard Glissant, an inspirational poet and philosopher from Martinique on the third journey of this display: one of intellectual reflection and discovery.

The Happisburgh footprints were discovered in 2013 by a team of scientists led by the British Museum. The footprint surface was exposed at low tide as heavy seas removed the beach sands but it only survived two weeks before being washed away. A 3D model of the exposed surface was created using digital photography, which has been used to create a projected animation that will be displayed within a novel gallery design that evokes a shipping crate in order to underline the enduring theme of human movement.

The Happisburgh footprints are the earliest evidence of humans in northern Europe, The people who made them are known from fossil remains from Spain, assigned to the species Homo antecessor (“Pioneer Man”). They were of a similar height to modern humans but a completely different species. These very ancient people ventured beyond their known world by crossing a land bridge that connected Britain to continental Europe. It was this and similar journeys that eventually led to ancient people adapting to more difficult environments in the search of basic human needs: food, clothing, shelter and fire.

From a million years ago, we arrive at the present day with still the same needs, but different boundaries. Édouard Glissant’s moving and poetic words are expressed through the documentary film, One World in Relation. These excerpts express the devastating impacts of slavery, colonialism and racism towards Caribbean culture. Glissant nevertheless offers a positive outlook on the potential of humanity. Although a migrant may lose the social and cultural ‘unity’ of their place of birth, they gain a cultural diversity or ‘multiplicity’. He explores how differences do not divide us but rather can co-exist with what we share and hold dear in order to create stronger, global communities.

The third journey, Ali’s Boat, is an artist’s book by Sadik Kwaish Alfraji made in 2014 that acts as a meditation about the nature of exile. It is inspired by an encounter that the artist had with his 11 year old nephew on a visit to Iraq in 2009, who gave him a drawing of a boat, with the words ‘I wish this boat takes me to you.’ Alfraji left Iraq in 1991 and now lives in the Netherlands. He works in a deliberately child-like style, made all the more poignant by the clear melancholy present in all of his work; many of his drawings form the basis of video animations. The text that threads through the illustrations is addressed to his nephew Ali. ‘I was like you, Ali… I had a boat… it was the colour of gold in dreams and studded with lapis lazuli’. It is a warning that the arduousness of the journey and the arrival itself can easily shatter that dream: the hope of a new life. Ali’s boat was acquired in 2015 thanks to CaMMEA (Contemporary and Middle East art acquisitions group). The British Museum acquired an edition of prints made from the book, thanks to CaMMEA and the Brooke Sewell Fund, which makes it possible for each page of the book to be shown together with the original book.

This display was born of discussion with the British Museum’s director, Hartwig Fischer, who says “the display poses the questions about what connects these very different journeys. How can we learn from the long-term movements of people, often against all odds? It is through this study of people over time and across the globe, that we learn more about impact of migration and people’s ability to adapt to and shape a new world.”

The Asahi Shimbun Displays are a series of regularly changing displays which look at objects in new or different ways. Sometimes the display highlights a wellknown item, sometimes it surprises the audience with extraordinary items from times and cultures that may not be very familiar. This is also an opportunity for the Museum to learn how it can improve its larger exhibitions and permanent gallery displays. These displays have been made possible by the generous sponsorship of The Asahi Shimbun Company, who are long-standing supporters of the British Museum. With a circulation of about 7 million for the morning edition alone, The Asahi Shimbun is the most prestigious newspaper in Japan. The company also publishes magazines and books, and provides a substantial information service on the Internet. The Asahi Shimbun Company has a century long tradition of staging exhibitions in Japan of art, culture and history from around the world.

Image - The footprints when discovered at the site of Happisburgh, Norfolk, in 2013 © Simon Parfitt