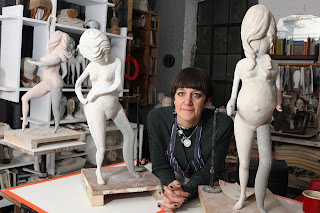 In April, Cathie Pilkington, Royal Academician and Professor of Sculpture at the Royal Academy Schools, will present a new project Life Room: Anatomy of a Doll...


Known for her unsettling sculptural bricolages, Pilkington has created new work for this display, bringing these peculiar doll-like creations to the heart of the longest established art school in the UK.

Inspired by Edgar Degas and his series of wax figure ballerinas, Pilkington will respond to his idealised dancers by overwriting their traditional figures with re-imagined, voyeuristic sculptures. Her sculpted ‘dollies’, with their two-faced heads and strange anatomies, will be displayed in various stages of completion, revealing the creative process behind Pilkington’s sculptural practice. By presenting these doll-like works as fusions of both sculpture and toys, Pilkington will highlight the duality of her personality as both an artist and a mother, sharing her experience of combining disparate identities.

The display of Anatomy of a Doll in the RA’s historic Life Room draws upon the traditional use of the space for exploring and documenting anatomy, through the process of life drawing. Alongside her ‘dollies’, Pilkington will create contemporary drawings and sculptural shelf-structures to accompany the existing busts, casts and architecture from the RA Collections, bringing into focus the importance of the room to the making, teaching and debating of art. 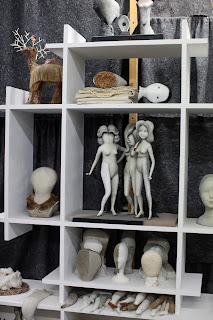 Cathie Pilkington RA said, 'I have always been driven by an obsession for material language and a need to make objects that occupy real space. I am as interested in making autonomous, singular objects as I am in every aspect of their making process, storage and display. Simultaneous engagement and estrangement is central to this work.'

Cathie Pilkington RA is a London-based sculptor and a figurative artist, renowned for crafting ambivalent forms. Her sculptural practice combines the interrelated and antagonistic worlds of fine art and craft. Pilkington studied BA Silversmithing at Edinburgh College of Art (1985–91) and was awarded the first John Watson Prize for Art upon graduating in 1991, with a show at the Gallery of Modern Art, Edinburgh. She went on to study Sculpture at the Royal College of Art (1995–97) following which she was awarded the Cheltenham Fine Art Fellowship in 1998. Pilkington has previously showed with Bruton Gallery, Bath (1992) and was in the 1st RWA Open Sculpture Exhibition (1993). She is currently represented by Marlborough Fine Art, where she had solo shows in 2007, 2010 and 2014. She became a Royal Academician in May 2014 and was elected as Professor of Sculpture for the RA Schools in January 2016.