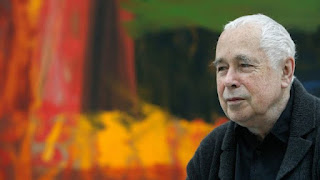 Howard Hodgkin is widely regarded as one of Britain’s greatest artists and has been a central figure in contemporary art for over half a century. He was born in London in 1932 but as a child was evacuated to America during the war. Back in Britain, he studied at the Camberwell School of Art, followed by the Bath Academy of Art between 1950-54, where he later taught for many years. He also served as an influential trustee of Tate and the National Gallery.

In 1984 he represented Britain at the XLI Venice Biennale and he was awarded the Turner Prize, in its second year in 1985, for his work A Small Thing But My Own.

As well as being the subject of numerous major retrospectives, with his paintings and prints held by most major museums, he designed the set and costumes for several opera and ballet productions including most recently Layla and Majnun performed by the Mark Morris Dance company in 2016. He was knighted in 1992, awarded the Shakespeare Prize in Hamburg in 1997, and made a Companion of Honour in 2002.

Tate Director, Nicholas Serota paid tribute, saying “Howard Hodgkin was one of the great artists and colourists of his generation. His sensuous, intense paintings were infused with his love and understanding of late nineteenth century French painting, especially Degas, Vuillard and Bonnard, and by his feeling for the heat and colours of India, which he visited on many occasions. Over the past thirty years Howard’s international standing has continued to grow with major exhibitions in Europe and America. His characteristic subject, the memory of a meeting or a conversation with a friend, resulted in paintings that radiate the emotions of life: love, anger, vanity, beauty and companionship.”

Here is a short video showing his work in the latest exhibition, in Gagosian Gallery, Hong Kong.