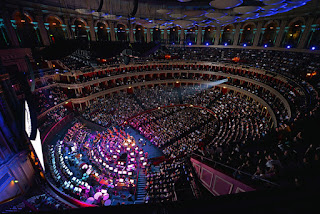 John Williams’ iconic score for Steven Spielberg’s Jaws will be played live in its entirety for the first time ever in the UK, as the centrepiece of the Royal Albert Hall’s annual Festival of Film this October...

Jaws in Concert will reinstate three superb pieces of music written by John Williams for the 1975 film, but ultimately excised from the finished product. These have been restored to the movie with the permission of Spielberg and the composer.

Alongside this film-and-live-orchestra world premiere, the Festival will highlight the work of three other big names in film scoring, with retrospective concerts celebrating Michael Giacchino, James Newton Howard and James Horner.

James Horner: A Life in Music is a world premiere, with the Cinematic Sinfonia performing the composer’s greatest music, including Braveheart, Titanic, Glory, Field of Dreams, Avatar and Aliens. Horner made one of his final public appearances at the Hall for the film-and-live-orchestra debut of Titanic, two months before his untimely death.

The new Michael Giacchino show, celebrating his 50th birthday, will include highlights from Rogue One, Lost, The Incredibles, Star Trek, Inside Out, Dawn of the Planet of the Apes and, of course, Up, the instant classic for which he won an Oscar, a BAFTA, a Grammy and a Golden Globe.

Lucy Noble, Artistic Director at the Royal Albert Hall, said: “After the success of last year’s inaugural Festival of Film, we’re delighted to present an even bigger, better programme for 2017. From Jaws to the work of James Horner, a 70-piece orchestra to a silent disco, and MGM musicals to hip-hop for kids, there’s something for everyone. Though the Hall’s programme is the most diverse in the country, we’re synonymous with great music, and this groundbreaking festival looks to bring film music centre-stage where it truly belongs.”

Other highlights include I Can See the Future, an exhibition of vintage movie posters investigates sci-fi visions of the future and their links to the music of David Bowie. Find out more about the Festival of Film, which runs from Saturday 7 October - Friday 3 November 2017, and how to book tickets here.