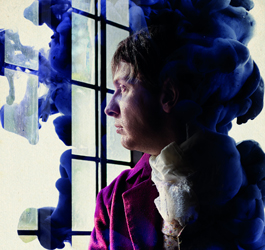 William Wordsworth: poetic genius or irresponsible egotist? A world premiere production opens this weekend at Keswick's Theatre by the Lake which explores the man behind the myth...

It's 1812 and all is not well in the Wordsworth household. Money is tight, the children are getting sick, and the wild and unpredictable Coleridge is stirring up trouble in London. But much to his sister Dorothy's dismay, rather than penning his next poem and providing for his family, Wordsworth's priorities seem to lie with repairing his relationship with Coleridge and currying favour with London's elite.

Nicholas Pierpan's vivid and passionate new play is a funny, moving and poignant portrait of a man torn between poetic ambitions and family duties. It features a distinguished cast including Olivier-award winning actor Joseph Mydell and Emma Pallant as Dorothy.

John Sackville, who recently played the role of Peter de Courcey in the Golden Globe-winning Netflix series The Crown, takes the title role and the theatre have released this short Q and A with him.

Lots of people probably have some kind of idea in their head about Wordsworth and what he was like. What do you make of his depiction in the play? Did anything surprise you about the characterisation?

He is as complex and contradictory as most human beings, but with an especially passionate and stubborn determination to stick to his principles - to the point where both he and his family suffer some tough consequences.

I suppose many people associate Wordsworth with the older man depicted in the later paintings, when he had "made his name”, as did I, and also see his poetry as focusing on the beauty of nature in a way which is perhaps a little unchallenging, even if it is impressive and stirring. They also see him – as did I – as being perhaps without the dash, verve and romance of a Keats, Shelley or Byron (all of whom died young of course, adding to the romantic myth surrounding them – one of consumption, one by drowning in a storm, the last while on a military campaign in Greece).

This play taps into a man who was almost certainly the most revolutionary and "romantic” of them all, in his perception of what the world around him was really like, and his view of people within it. He was a spiritual firebrand who had very advanced metaphysical views – this aspect of his poetry is often overlooked but he was way ahead of his time and in the play this side of his nature is fully explored. It takes place over about three months of massive crisis in his life, so you see a man struggling to deal with life in a way you might not have expected. He is certainly not wandering lonely as a cloud, but battling with the skies of life.

How are rehearsals going so far?

A great company. A great director. A great play. What more could we ask for?

You do a lot of film and TV work as well as theatre. What do you enjoy/find challenging about the two mediums as an actor?

In film and TV having to use all your resources as an actor to create the world of a story – and the particular tensions and drama of relationships - multiple times over when the director calls "action” is a very exciting challenge. To produce this chemistry from scratch, sometimes without much rehearsal, and to give it depth is quite a task. You get no "run up” as it were, most of the time – other than what you do prior to the camera rolling. And you don’t want to come into a scene "empty”.

In theatre, the challenge is similar to the extent that you are recreating a spontaneous truth each night but it has probably been rehearsed and plotted in much more depth, so you have to work that bit harder to make it fresh. You also have to maintain this over a long period of time each night in a role like Wordsworth which is demanding but also very satisfying. In film and TV it’s far more stop and start. But levels of concentration for both are just as intense – it’s a bit like using slow twitch or fast twitch muscle fibres. Intense, short bursts of activity or longer periods of exertion. Film and TV can also be frustrating as great work can end up on the cutting room floor. In theatre that can only happen if a director is in some way restricting your choices in rehearsal; once you’re on stage, within the rough shape of the piece, you have the freedom to do what comes in the moment and no-one can edit it!

What do you think audiences will take away from the play?

They will, I hope, identify with the challenges and struggles that every person - and every family – faces in their lives. I hope they will also see how life for us all is a balancing act between chasing your dreams and handling your reality. I hope they will also be inspired by one of the great visionary figures of world history – whose connection with nature and the spirit of man was unparalleled in Western culture – and quite possibly still is. I hope they will also go through an exciting three-month journey in the lives of the Wordsworth family, his best friend Coleridge and those forces in society ranged against them, at a time when huge decisions were being made in all their lives.

William Wordsworth is a co-production with English Touring Theatre, one of the UK’s most successful and exciting production companies, widely regarded as England’s National Theatre of Touring. They work with leading artists to stage an eclectic mix of new and classic work for audiences across the UK and overseas.

William Wordsworth plays in Theatre by the Lake's Main House from 31 March to 22 April. Watch the rehearsal trailer below then find out more and book tickets on the theatre website.

Images & Info - Theatre by the Lake
Email ThisBlogThis!Share to TwitterShare to Facebook