Review - We Are X 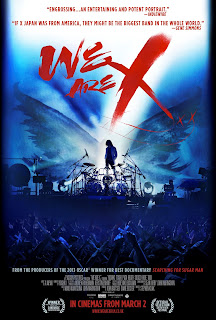 Susan Omand asks why she had never heard of the biggest band in the world until she watched the music documentary We Are X...

That's why I play drums like there is no tomorrow...

We Are X? Who are X? And how did I not know about this band before?

If you think Babymetal are the best rock/metal band to come out of Japan, I'm telling you, you seriously need to think again. Because we’re heading right back to the 80’s to find the godfathers of the genre, to see the inception of the game changers of Japanese music, heck, the evolution of the revolution of the whole of Japanese pop culture. Meet X Japan. 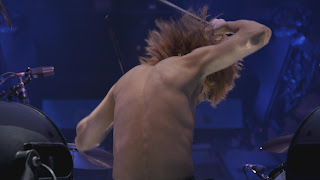 Centring on the band’s founder and drummer Yoshiki, and taking as a backdrop the run up to the band’s enormous Madison Square Garden gig in 2014, this is an indepth look at the story behind “the biggest band in the world.” Yoshiki gives a heartfelt and personal account of his life with the band and without it - of meeting band vocalist Toshi when they were both 4, his classical music training and the suicide of his father when he was 10, the absolute trauma of which still fuels his song writing today. He tells of how the original members of the band got together and were signed by Sony in 1987, becoming hugely famous in the country for both their music, that alternates between incredibly emotional rock ballads and “crazy fast” power metal, and their shocking “visual kei” image which infused traditional Japanese styles with spiky punk and neon glam. It is a story of true rock and roll proportions, with success, sackings and suicides, a failure to crack America and the band’s breakup in 1997, after lead singer Toshi fell in love with a member of a cult sect and ended up being brainwashed against everything the band stood for, calling them Satanists and saying they had ruined a generation of Japanese youth. Ten years of silence passed until, out of the blue, the still brain-washed Toshi contacted Yoshiki again about reforming the band (as he had been instructed to by the cult). This led to a meeting in LA that broke the spell of the cult for Toshi and a band reunion was planned. 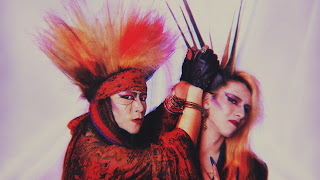 This fascinating band history is interspersed with stunning archive footage of the band and its members both on and off stage through the years and more recent film of Yoshiki regularly in hospital in the run up to gigs with muscle and ligament damage due to his drumming style. There are interviews with the surviving band members, behind the scenes peeks and interviews with rock gods like Gene Simmonds and Marilyn Manson on the band’s influence and issues. There’s even a cameo by Stan Lee. Yes really, there is. And the music? Oh the music is immense. It’s epic, symphonic, screaming heavy metal and poetic, lyrical, melodic ballads. It thundering drums and soaring vocals. It’s big hair and even bigger noise – it’s no wonder they have sold over 30 million albums world wide.

That's what this documentary is - a well paced, indepth, informative and utterly fascinating look into a band I knew nothing about previously. What impressed me the most about it though is the genuineness of Yoshiki and how heartfelt his love is for the music, the band and his bandmates past and present. Quite often, bands in music documentaries can come across as guarded, cynical or even fake, being very careful about what they say and didn’t. With Yoshiki I got the feeling that he wanted to explain things, to open up, to share his passion and his problems, and it was done so honestly, eloquently and beautifully that, from knowing nothing at the star, after 90 minutes I feel like I have been a fan of the band forever and will continue to follow them forever more. This documentary also manages what many fail to do – it becomes about more than just the band. It is a reflection of the past and a look to the future. It’s a story of survival, overcoming adversity, channelling grief and never giving up. It’s inspirational and aspirational. Fortune favours the bold and true world domination is now finally within the grasp of Yoshiki and his band.