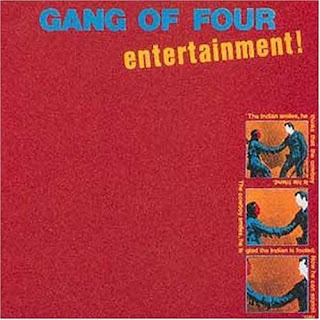 Marc Nash offers us some Entertainment with a look back at the classic 1979 album from Gang of Four...

When Punk Rock broke in 1976, there was a race to get the first Punk single out there, a title The Damned claimed with “New Rose”. Three-chord thrash pub rock as lauded and modelled in seminal Punk fanzine “Sniffin’ Glue” with a diagram of a fretboard and an exhortation to ‘go form a band’. But by the back end of 1977 and into 1978, the art school Situationist ‘Cash from Chaos’ of Svengalis Malcolm McLaren (Sex Pistols) and Bernie Rhodes (The Clash), was already on the wane, with The Clash about to relocate to the USA and the Sex Pistols in meltdown. Enter the University born New Wave, where the inspirational energy of punk was harnessed to a more thoughtful lyrical politics and some angular musical virtuosity. Bands like Delta 5 and Au Pairs put boys and girls together in bands making intelligent music, following on from the lead of Gaye Advert (The Adverts) and Poly Styrene (X-Ray Specs). But the album I want to offer up that best represents the New Wave is Gang of Four’s “Entertainment” which came out in 1979.

Formed at Leeds University, lead guitarist Andy Gill and vocalist Jon King brought an analytical, political, (oh okay then, let’s whisper the word,) Marxist perspective to their lyrics. “At Home (He’s A Tourist)” is about gender relations on the dancefloor and back in the bedroom; “Guns Before Butter” is about Fascism; “Natural’s Not In It” about the commodification of pleasure and the consumerism behind leisure; “Ether” was about the conflict and colonialism in Northern Ireland; “Not Great Men” was a historical perspective on how history is made by the unnamed citizens as much as the famous names we are left with in our textbooks; “5.45” is about how the production of TV news content is made safe and unchallenging, the dab of blood in your high teatime boiled egg resonating with equal emotion as that of the blood of corpses on the news from some far away war. Such overtly political lyrics started to engage audiences, after the ideational-lite emotional fury of punk had trailed off. This would lead to movements like Rock Against Racism and benefit concerts for political causes such as CND. The album’s cover, blood red with 3 offset panels with annotated text as to the true relationship behind a cowboy shaking hands with an American Indian. The album is called ‘Entertainment’, but the image blazons that it’s about exploitation. Here we are consuming an LP that is warning us about how we go about consuming leisure.

But it isn’t just about the lyrical content, the music was innovative and thrilling too. In Go4’s case, funky bass, with angular, choppy, strangely tuned guitar work from Gill. The sound was fairly clear, each musical element having its own space, rather than clutter of feedback and guitar squall beloved of the thrash punks. It was more risky musically than punk, demanding a retuning of the ear, but it was also far more coherent. Singles “Damaged Goods” and “At Home (He’s A Tourist)” are both catchy, powerful tunes. But the piece de resistance comes with the final track, about as far removed from a throwaway or filler as you could imagine. “(Love Like) Anthrax” is an immense song, despite its rampant experimentalism in musical form and delivery. First Gill and King have completely separate narratives battling over each other, one about the ideal of romantic love as epitomised in pop songs, the other a narrative about the morning after the night before, in which Kafka’s “Metamorphosis” is referenced “I feel like a beetle on its back”. Musically this is a feedback loop, but it is controlled and not just about volume and distortion for its own sake. It has the effect of funnelling you into its subversive heart, akin to a Venus Fly Trap swaying and enticing, till it clamps you in its adhesive. I’m no sound engineer, but it appears to me to be played backwards. Amazing stuff.

This album, along with Public Image Limited’s “Metalbox/Second Edition” threatened to offer a distinctly British music aesthetic, one that wasn’t tied to 12 Bar rock and roll, only Gang of Four went down the funky-disco route and PIL went, well just bloated stadium rock. What might have been, was at least in 1979, realised for a brief moment.