Review - The Fall, Live at the Witch Trials 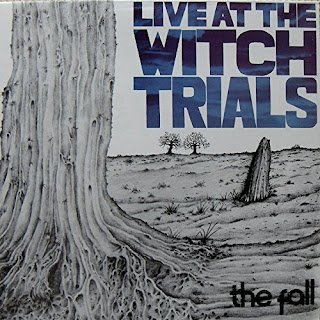 Marc Nash heads back to 1979 and the start of The Fall, with Live At The Witch Trials...

The debut album that announced the arrival of Mark E Smith and The Fall on the UK music scene. Maybe more mumbled and muttered than actually announced. It is not a live album, though it may well have been in spirit, recorded in just two days and with Smith allegedly finishing vocal recording in the building’s lift on the way out. And no ostensible witch trials on show here either, though this is the omphalos where Smith’s tongue began its 40 year salvo of condemnations and accusations. The album cover, perhaps perversely, is a wooded or bucolic scene, seeing as The Fall are the most urban band you could ever conceive of. Not for them playing Scandi festivals with suckling pig being roasted on open air fires.

Smith’s half-spoken vocal style sets the tone. Northern, definitely Northern in timbre. He’s no less pissed off than the punks, but his ire is sedentary, sat sounding off in a pub with very little intention of doing anything about it. The punks gobbed as a statement of disgust, Smith is phlegmy because he smokes too much. Smith declaimed being labelled as punk and nor were the band New Wave. Which was fair enough, because they really were idiosyncratically beyond the pigeon hole of any genre. Both erudite and vulgar, Smith could veer from high to lowbrow within the same line of a song. Here he employs literary references and wordplay a plenty. Opening song, the bass throb menacing “Frightened”, has the line ‘I’d run away from toilets and faeces/faces’ – you can’t actually tell which because of his Mancunian intonation deliciously slurring across so it could be either. “No Xmas For John Quays” – ‘junkies’ get it? No holiday for addicts who need to score, and then nod off long before the Queen’s Speech comes on telly, ‘He gets to sit in/Talking to his kitten’. A cheesy rhyme from a poetry point of view, but it works.

There are plenty of songs taking pops at the music industry and fellow bands, such as “Rebellious Jukebox” and “Music Scene”, a theme and line of attack Smith has not wavered from in all of his myriad albums since. However, the songs that have a sharper, more critical edge that firmly places the Fall as critics of decaying Britain at the end of the 1970s, are “Industrial Estate” and “Futures And Pasts”. The former is about wage slavery drudgery and asking for a prescription for Valium as the only way of getting through. Factory life also crops up in “Two Steps Back”. While “Futures And Pasts” offers a particularly bleak verdict on our current lives, ‘You can cry for your lost childhood/ Will you cry for our lost childhoods?’.

Musically, every time Smith remakes his band, he manages to recruit well and surround himself with fine, albeit off-kilter, musicians. This first incarnation, including guitarist Martin Bramah (who went on to form the Blue Orchids) were musically accomplished, but again every musical element sounds just a bit off. Noodling guitar, plodding bass, keyboard squiggles, but it all works. It maybe approaches the nerve endings of when fingernails are scraped down a blackboard, but this perfectly sets the musical accompaniment for Smith’s harsh acerbity. With this album, don’t say we weren’t warned…