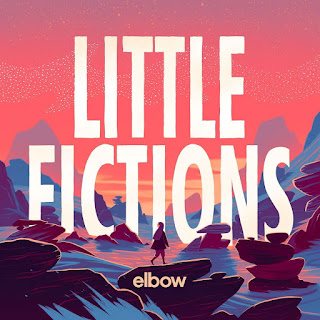 Susan Omand is trying to listen to some new music by randomly picking albums to listen to. Today is the turn of the new release from Elbow, Little Fictions...

Yeah.... Elbow. They’re one of these bands that I’ve kinda heard of but never actually listened to, probably because I stopped really listening to music in the early 90’s and it’s taken 25 years to get back to it again. So what do I know about Elbow? They appeared in the late 90’s and seem to have been hanging around the peripheries of the mainstream music scene ever since rather than making it really big or dropping out and being a truly cult band. I know they won the Mercury Music Prize back in the day (which, in some ways, seems to guarantee future anonymity) and I know Guy Garvey’s name from various festivals, and the fact he looks like Charlie Brooker, but I don’t really know their music. So when my Amazon Music Streaming thingie (tech term) started to trumpet about Elbow’s new album, Little Fictions, which got released last Friday, I started to wonder if I had missed something and gave it a listen.

The first thing that struck me about the album was Garvey’s voice. It took me a moment to place it but then it came to me - doesn’t he sound like Sting! Has he always sounded like Sting? I mean the Sting from around the time of Englishman in New York rather than his work with The Police. In fact a lot of the tracks on this album have that meander-y, easy, pleasant but not show-stopping sound that Sting went for. So I’m afraid that kind of coloured my listening of this album because I couldn’t un-hear the comparison throughout the whole thing. As well as the Sting-like vocals, a lot of the other music reminded me of the slower tracks from the likes of Del Amitri and Deacon Blue, only without the Celtic fire that was always evident in their work. There’s nothing threatening or anti-establishment about Elbow, probably the angriest you’ll get from this album is a slightly menacing piano bass on Firebrand & Angel, track 6 on the album. The first track on the album is probably my favourite though. Magnificent (She Says) starts with a minor key and an eighties electronica sound which, when coupled with Sti... er... Garvey’s voice gives a bit of a Dave Gilmour “On An Island” vibe. It’s also very well orchestrated and the strings lift it to be the stand out track of the album. Maybe the first track set the standard too high and spoiled the rest of the songs for me a bit as they dropped into the bimbling along, keeping itself to itself, non interfering music, but I didn’t hate any of it.

So will I listen to Elbow again? Maybe. I won’t seek out the back catalogue for active listening but it will make agreeable enough background sounds and that just about sums it up. Elbow... music to do something else to.