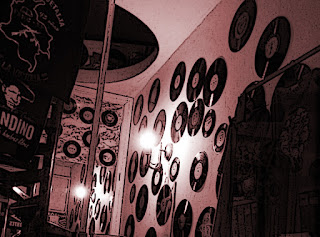 But occasionally the cover version is neither homage nor pastiche, but actually manages to improve on the original. Maybe it just has better quality of the recording. But more likely it's either more deliciously taut than the original, or perhaps more camp and reveals what was present in the original composition all along but had just got hidden.

So here's 15 of my favourite cover versions. Enjoy.


1) The Specials - Message to Rudy

The Specials did several cover versions of Ska songs, launching off with a cover of "Gangsters". But this just throbs with emotion that lifts it from the original by Dandy Livingstone whose vocals are a bit tentative.

While Dionne Warwick's original is pretty damn fine, the sheer dirtiness of the bass sound and Hugh Cornwall's guttural vocals just make this a totally different song. Someone should do a mash up of the two it would be ace.

Deborah Evans does her best Nico impression and this knocks the Beatles' original into a cocked hat. It's so basic, so stripped down, it's almost perfect pop, or anti-pop.


5) Saint Etienne - Only Love Can Break Your Heart

Yes they were Camden Town music hipsters playing fast and loose with musical post-modern irony, but since I've always found Neil Young's voice a bit reedy, having a deliciously fragile female vocalist sing it made much more sense. Know it all pop that turns out to be just perfect pop in its own right.

Another of those rarities where I like both versions equally, but the tribal nature of the two clans, the old school dance mob who love the original versus the Nu-Rave devotees of this version go at it hammer and tong in the comments section.

This is the inverse of the Warwick/Stranglers scenario. For here is Nina Simone's full-bloodied original dripping with regret, hurt and a touch of bile, turned into a camp late night whisky bar song (and sung off key to boot) by one of the hardest living & rocking bands in the world. I can't get enough of it.

And then there are some that are just weird and wonderful. Donovan's original was a bit odd in its own distortion pedalled right and the Buttholes just turned that up to eleven in their hilarious version.

Marc Almond takes Gloria Jones' Motowny feel and manages to make it both seedy and full of pathos at the same time. One of the songs that perhaps shows the biggest differential between the two versions.


10) Minutemen - Have You Ever Seen The Rain

Another example of a beefier modern sound improving a slightly hollow 60's version as Creedance Clearwater Revival's genius is suggested by having so many modern bands pay tribute to them with cover versions.

Even live the quality and musical noodles going on here put Willie Williams' version into the shade I'm afraid. And this was only ever a Clash B-Side!

Boot on the other foot now and The Clash have one of their songs claimed in another style. This sounds somewhat more authentic somehow.

Tricky takes a plodding Public Enemy standard and turns it into an genuinely unnerving version.

I can think of few songs that have so utterly had the band's stamp smeared and coated all over it like this. West London blight stamped all over a disco number by Lipps Inc. that was more likely to have been played in the clubs of the West End.

I say bonus track.... There is always the spectre of non-singing celebs doing terrible cover versions, like Paul Gascoigne singing Fog On The Tyne. Shatner here does to pop music what he did to method acting.