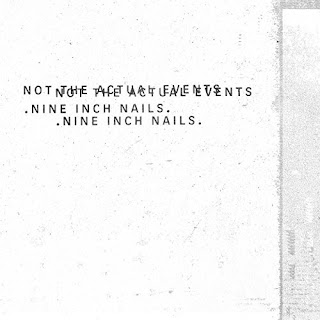 Reece Morris-Jones gives us his actual review of Not The Actual Events, the new EP from Nine Inch Nails...

There’s a bit of an unspoken rule amongst fans of Nine Inch Nails – the more depressed Trent Reznor (the founder and only full-time member of the group) is at the time, the better music he makes. Not that this devalues anything the band do – the move from drug-fuelled angsty industrial rock to pieces that reflect a more polished but atmospheric sound in the past decade has been a positive one in my mind. Especially now that Reznor has stopped being afraid of writing songs that fuse his ability to mould solid poppy hooks with the band's trademark biting wall of sound (see 'Copy of A' or 'Hand that Feeds').

But nonetheless, amongst many fans there was a bit of a question mark hanging in the air about the band's future. How could a man who is now happily married, cleaned up, with an Oscar on the mantelpiece, deliver the kind of music that draws howls from the depths of your soul? It turns out – very easily.

Branches/Bones kicks off the EP in an aggressive, hurried fashion. Distorted guitars with choppy, glitching synthesizer loops roar, just long enough to have you wanting more as it cuts off. Not so much a track as a way to get the heart pumping; I can see this being a great intro piece to any future tours.

Dear World is silly. But also very sincere in subject matter. Combined with a catchy but oddly sexual backing loop that permeates the whole track, it allows Dear World to enter the pantheon of great NIN songs, even as Reznor sings about the increasing disconnection the modern world forces upon us. I can see this becoming a fan favourite.

Taking things in the direction of  “unfriendly and fairly impenetrable” that was promised of this album, She's Gone Away slows things down to create a howling and atmospheric six minute track that, wherever it was drawn from, shows that familial bliss just gave Reznor another avenue of despair to mine.

The Idea of You is the worst track on the EP in my opinion. I just can't really remember much of it – invoking and falling prey to the worst parts of NIN post-Fragile work that critics of the band accuse them of. Some may like it, but it's just so very mediocre to me. Which is a shame, given it uses a piano line that NIN fans will be very familiar with.

Burning Bright (Field on Fire) feels, and I know this sounds odd, reminiscent of a Nick Cave song. Well, if one took his soulful musings and put them to a backing track of an industrial shredder. There's a meditative quality to the entire song, as the distorted vocals discourage the listener from thinking too much about the lyrics and instead enjoy the journey the song is taking you on.

Overall I quite liked the EP. Clocking in at 21 minutes, it feels like a transition phase, almost as if Reznor is giving us a glimpse of the band metamorphosing to another iteration of itself as he comes up to 30 years in the music game. Whilst it's a shame that all five tracks can't be surefire smashes, 4/5 isn't bad and it is interesting to listen to someone who is arguably a leading music industry figure today work through their neuroses.

If one could create a word for smiling with joy despite being utterly miserable, that would be what I got out of this EP. It won't be for everyone's taste, but if you like electronic music or are a fan of NIN, then you can't afford to miss out on this one. Which given that EDM or its influence rules the airwaves these days, means just about everyone.