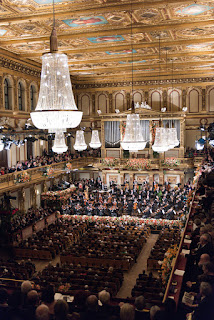 Susan Omand goes from being 'Brahms and Lizst' at Hogmanay to listening to Strauss and the 2017 New Year's Day Concert from Vienna...


Watching the New Year’s Day Concert from Vienna has become a bit of a tradition for me. I must admit that Strauss waltzes are not my usual listening choice but, for something upbeat that is also gentle on the ear and the mind (and the hangover) they are very enjoyable indeed.

Petroc Trelawney introduced the televised 90 minute climax to the concert, the start of which was on Radio 3, and let us know that it was again set against the opulent backdrop of the Golden Hall of the Musikverein in Vienna, that it marked the start of the 175th anniversary year of the Vienna Philharmonic Orchestra and that this was the New Year’s concert debut of the wonderful Venezuelan conductor Gustavo “The Dude” Dudamel. Going “track by track” here’s what we were treated to in the concert.

Franz von Suppe, Overture to Pique Dame – this is a piece of music that I wasn’t familiar with at all, only really knowing von Suppe’s very famous Poets and Peasants overture. This piece was very different from the gentle lulling waltz music I was expecting from the concert as it belted along at a real pace in the galops, with some marvellously contrasting crescendos and very military sounding snare in among lighter, much more deft melody. Altogether a wonderfully vibrant start to proceedings.

Carl Michael Ziehrer, Hereinspaziert! From the Operette “Der Schätzmeister”, op. 518 – now here is a composer that I’d never heard of, never mind the piece of music. It turns out that he was an Austrian composer, contemporary counterpart and rival of the Strauss family and this is very much a traditional waltz, light and easy listening with a lilting melody. As they tend to for these concerts, this was one of the pieces chosen to showcase the talents of the Vienna State Ballet and add a bit of “visual interest”. Now, I really enjoy watching ballet when I actually go to see a ballet but, when it’s the music that should be central to the concert, I want to see the orchestra and the conductor. A minor niggle, yes, but it still annoys me.

Otto Nicolai - The Merry Wives of Windsor, Moon Rise – from dancing to singing and a performance by the amateur Choir of the Society of the Friends of Music. Our host, Petroc Trelawney, told us that Nicolai, the composer of this operatic version of the Shakespeare play, was one of the founders of the Vienna Phil. He went on to list their founding principals, as set out by Nicolai, that the orchestra was self governing, the players choose the conductor and they divide the earnings amongst themselves. As for the music , it ended up being a piece that I had heard before, just not known the name of. I really like how this piece builds up slowly adding instrument after instrument until the voices come in in a marvellous chorus, beautifully sung. It has an almost religious sound to it, beautifully evoking the “end of day” feel to the moonrise, and the chiming of the sole bell adds a real melancholy to an ethereal piece of music. 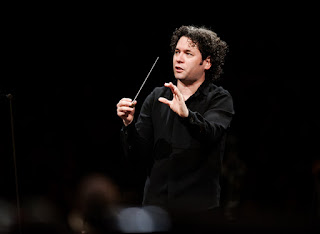 Back on familiar territory now as we get to the family of composers synonymous with the Viennese concerts. First up, Johann Strauss, Jr. with the Pepita-Polka, op. 138. A really happy piece of music this – nothing fancy but it’s sheer simplicity means it must be very difficult to play as everything is out there and there is no place to cover up mistakes.

Next, and by the same Strauss is Rotunde-Quadrille, op. 360. A Quadrille is a set of 5 short tunes to be performed as square dances and there were some lovely variations around the central melody in each of the 5 pieces and superb percussion – one of the few times that a tambourine really works in an orchestral piece.

Die Extravaganten. Walzer, op. 205 is next and, rather than people dancing, we got a look at the famous Lipizzaner horses from the Vienna riding school. Interesting non-music related factoid as an aside - the Lipizzaners aren’t actually white horses, they start of as dark and get lighter each year. So now you know. The sight of two dozen white horses, with their dark foals, galloping into a field was indeed impressive but the visuals felt a bit distracting to the music for me because orchestra! (See previous whinge). As for the music, it was indeed extravagant and a lush multi-layered Viennese waltz but more than that I couldn’t really say as I was watching dancey horses.

Johann Strauss again, but this time Senior takes over from Junior for Indianer-Galopp op 111. Inspired, apparently, by a group of classical Indian dancers who visited Vienna in the 1830’s, you can really hear the Indian influence in this short and sweet track. All it needed was traditional Indian instruments rather than a classical orchestra and you could have been on the set of a Bollywood movie.

From father to son again but this time the middle son, Josef Strauss with Die Nasswalderin (the Girl from Nasswald) Polka mazur,op. 267 which opens with a beautiful harp glissando, gentle strings and lilting flutes, nothing like the boisterous nature of a polka but conveying a much more sensitive, almost Romantic (as in the classical music period featuring composers like Brahms and Verdi, not necessarily as in smoochy) melody ending with some lovely whistly birdies courtesy of The Dude himself.

Johann Strauss, Jr returns to the fore with a much quicker polka, Auf zum Tanze! And again more distracting dancing so, I must admit, I stopped watching for this one and just listened to the music, which bounded along as a good polka should.

Strauss’ operetta Indigo and the Forty Thieves is the source of the penultimate piece of the main programme and a waltz called A Thousand and One Nights with some lovely cello, brass and bassoon opening into a gloriously strict tempo waltz that progresses through the strings exactly as you would want it to, refreshed by the continuation of the bright brass adding interest.

The final piece was the Tik-Tak polka from Die Fledermaus. Nothing to do with tiny mints, this was accompanied by scenes from the Clock Museum in Vienna (yes, I had started watching again) and had a lot of appealing (sorry, had to) percussive bell chimes as well as some ticking from the orchestra.

As always with the Vienna concert, that was not the end of the concert and the encores included youngest Strauss, Eduard’s polka Mit Vergnugen (With Pleasure) which was indeed full of happiness, as well as the standard, nay, required By the Beautiful Blue Danube and the stirring Radetzky March before the concert was over for another year.

The music this year was varied and very interesting to listen to, marvellously played by the orchestra, and the choral piece was absolutely beautiful, sending shivers down my ears. The highlight for me though was getting to watch Dudamel conduct. He really is the maestro and his animated enthusiasm for the music and electric connection with the orchestra just fizzes and sparkles throughout his performance, conveying just as much emotion as the music itself. If anyone tries to tell you that conducting is easy, don’t believe them, but The Dude makes it look effortless, exciting and entrancing – a true joy to watch and I’m already looking forward to the next time.