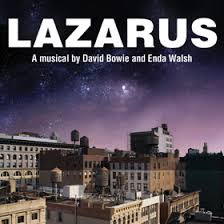 To remember David Bowie on his birthday and to mark the fifth anniversary of his death, producers Robert Fox and RZO Entertainment Inc are exclusively releasing the stream of the London production of Lazarus, the musical by David Bowie and Enda Walsh, captured live on stage. Here's a reminder of Daniel White's review of the musical from 2017...

Find out more and get your tickets for the 2021 online performances here.

I did not want to spend the evening of 10th January 2017 watching another bad Bowie tribute act, so the chance to see Michael C Hall perform in the London run of Lazarus was always at the top of my list.

A year on and I still mourn the man who soundtracked decades of my life. Bowie reinvented himself throughout his career and I cannot think of a single person who has done so with more success. However, my interest in Lazarus is more than a desire to be with other Bowie fans, as I really enjoy the cinematic version of The Man Who Fell To Earth. Bowie's twitchy and other-worldly performance as alien, Thomas Newton, really worked for me. Bowie refused to conform and it is his self aware and assured hold on his own career that led to an ability to transcend even the most left field of material. The Man Who Fell To Earth is a kind of marmite film, you either love it or hate it. It doesn't especially have much of a storyline but its strong messages of disconnect, ill fitting and isolation resonated strongly with me. 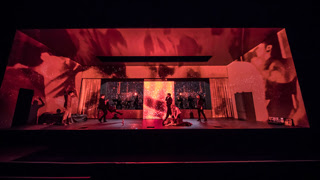 Lazarus picks up years after the events of the film and Thomas Newton is a broken man,. Unable to return home, he spends his days trapped in his sparse flat drinking gin and eating Twinkies. The staging too is sparse with a brilliant and striking use of multi media and a house band that play from the balcony. This could have been a total mess which would only appeal to the most die hard of Bowie fanatics and some of the critic reviews have been less than kind. But what do the critics know? They spend far too much time bleating on about development and plotting to the extent that they forget that, sometimes, theatre needs to go art house. Sometimes, theatre needs to throw the rule book out and deliver something which leaves the audience reeling.

Lazarus does this in true Bowiesque style and I absolutely loved every second of it. I have no idea what was real and what was in Newton's mind. That's kind of the point, you see, Newton has been abused to such an extent that he finds only the briefest of solace in his own fractured and bleeding mind, constantly yearning for his lost love and seeing the blue haired Mary Lou everywhere. Michael C Hall is astonishing as Newton and delivers the sort of performance that has dumbfounded audiences both here and over the water. Sophie Caruso is a the sort of performer that has a voice that explodes from her with the force of a tsunami. Her acting talent easily matches Hall's and their on stage chemistry is tantalising. Strong contender to steal Hall's stage dominance goes to Michael Esper as the murderous Valentine and Amy Lennox is simply sublime as the beautiful, if damaged, Elly. 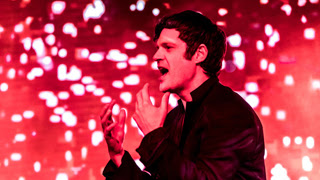 The treatment of Bowie classics that pepper Lazarus are brilliant and the stingingly poignant title track is delivered masterfully by Hall. My favourite though is the wonderfully understated and piano driven version of Heroes which reduced me to a tear stained mess at the end of the performance. Lazarus is an exploration of fractured relationships and a yearning to fit into a world that has turned its back. Bowie and Enda Walsh have produced a piece of theatre that refuses to start or end where it should do and, as it refuses to let audiences in on the secret, it risks being dismissed as a cynical death bed cash in. To do so would disrespect both cast and creatives as well as the memory of Bowie himself. This is not messy theatre and neither is it theatre that is sold out simply because it's run coincides with Bowie's anniversary and birthday. Lazarus is a brave and dangerous example of why theatre must and should take more risks. It has a sold out run because it is a work of genius and a potent nod of respect to a man who should have never been allowed to leave us.

Lazarus is a deliciously confusing and intriguing musical that holds audiences under its spell without losing them for a single moment. Bowie refused to be boxed and ignored every attempt to be controlled and tamed. Lazarus then IS Bowie and I miss him even more now!

"We are free now and that is a fact"