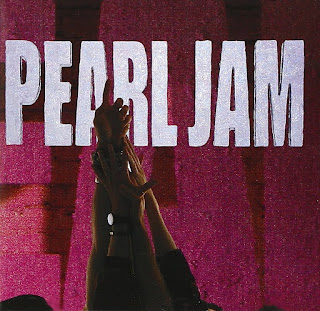 David Ames digs the gems out of the grunge as he goes through his Pearl Jam back catalogue to pick some of his favourite lyrics from the pen of Eddie Vedder...

I love the “grunge era” and almost all bands associated with Seattle and the surrounding musical communities of the time but I’ve always thought that many of the bands identified with Grunge didn’t actually fit the bill: Alice in Chains and Soundgarden were more metal than grunge and my personal favorite, Pearl Jam, was a blues-rock band.

I first fell in love with Pearl Jam at the ripe old age of eight. I wasn’t quite aware of the bigger social and cultural implications referenced in Eddie Vedder’s words—all I knew was that they rocked and I liked them a hell of a lot more than some of the other “grunge” bands of the time.

As I grew older and Pearl Jam evolved past their heavier Ten and Vs. days, I really began to notice the depth and complexity in Vedder’s lyrics. I can say without a doubt that for my money, he is the greatest lyricist. I know that is a controversial statement when you look at greats like the recently Nobel Prize winning Bob Dylan, but Vedder’s lyrics seem to strike a chord within me—one that few, if any, artist has ever done before.

Because of this, and of my immense love for all things PJ, I present to you my list of the fourteen best Pearl Jam lines. There were a lot to choose from so forgive me if I left out any great ones (I know I did) but here are my personal favorites, in no certain order. Also, bear in mind that this is simply how I have understood these lyrics and many times Vedder and company are vague enough to inspire multiple interpretations.


1. Once divided, nothing left to subtract. Some words when spoken can't be taken back.

This song has a wonderful pensive melancholy which you feel emanated through the music as much as the lyrics. It’s a song of lost love from an omniscient point of view, questioning why things happen and how the true emotional turmoil feels. These lines especially speak to the listener, advising to be cautious of those words you utter when you are upset because once you cross that line, there is no coming back.


2. Don't it make you smile when the sun don't shine at all.

For the longest time “Smile” was my favorite PJ song. It is bluesy and movies with a classic rock feel and the lyrics are simple and perfect. With the echoing chorus of “I’ll miss you always,” the song once again speaks the broken hearted and the age-old phrase “misery loves company” comes to mind. Doesn’t it make you smile when the sun doesn’t shine and for once, you aren’t alone in your misery? Pathetic fallacy be damned—let nature reflect how you really feel and revel in it.

There are few, if any, songs more emotional in the Pearl Jam catalog than “Release.” Chronicling the tumultuous and confusing relationship between Eddie Vedder and his father, this song describes how Vedder looks at the relationship he never truly got to experience. These lines reference the need to take what comes and deal with the pain of release and Vedder’s delivery ties the whole song together. With his voice reaching a passionate belt, he continually sings “Release Me!” It is both beautiful and poignant.

This line is self-explanatory. All of us have been in a place in life where we had emotions stirring but could not truly express ourselves for fear of upsetting someone or of losing hold of our responsibilities. Many of us hold in our true emotions and this simple little line says it all - sometimes we just want and even need to lose our temper.


5. I know some day you'll have a beautiful life, I know you'll be a star in somebody else's sky, But why can't it be mine?

This is probably one of the most well-known Pearl Jam songs. Still a staple on modern rock stations today, “Black” details the feelings of a love lost and the emotional toll it can take on a person. With the delivery of “Why can’t it be mine” we are able to truly feel Vedder’s abandonment and sadness. It’s a universal feeling acknowledged by anyone who has ever been left by the one they love. It isn’t angry—its emotional and confused and bewildered.

Drawing on their love of Neil Young, Pearl Jam came together with the classic rock god to record the Merkin Ball EP. This simple song shows us that everyone has things in their life which they must deal with and even if we don’t know what those things are, it is important to realize that we all go through trials.

Honestly, I might as well have just quoted this entire song. Vedder and Pearl Jam have always been socially and environmentally conscious and this song is a continuation of those beliefs. Vedder talks about the ways of human progress and how we threaten and destroy the earth for our own selfish means and then, instead of taking responsibility for our actions, we simply say that it is evolution. The constant repetition of “baby” at the end of it adds a nice sarcastic sneer aimed at those who take these problems too lightly. Also, there is a lovely statement about breeding people who are our exact copies and therefore will also never learn from our mistakes, further perpetuation the cycle of destruction. And, as a side note, this song jams.


8. Sorry is the fool who trades his soul for a Corvette. Thinks he'll get the girl, he'll only get the mechanic. What's missing? He's living a day he'll soon forget.

A simple song about misplaced priorities. People focus too much on the material and because of this, they waste their lives doing and worrying about unimportant things which have no lasting value. The single ukulele providing the instrumentals adds a wonderful minimalism to the song.


9. Saw things so much clearer once you were in my rearview mirror.

Once again Vedder delivers truth in a simple, single line: once you get past the things that are troubling you, hindsight becomes 20/20—being able to take a look at your past and realize that regardless of the hurt, you are better off.

There are very few undisputed truths in the world but Vedder references two here. We all know how we will come into the world and how we will leave it. The middle is then left to us to decide. We have all the power over our lives and while we live, we should do our best with the time we are allotted.

This song speaks to that voice inside all of us, waiting and twisting words until we question everything. Little secrets kept among people eventually grow out of control until they cause a large amount of damage. Like Vedder says here: even if the issue was small originally, by keeping it hidden the waves become enormous. Issues get out of hand quickly if they aren’t addressed.


12. Oh when I was a kid, oh how magic it seemed. Oh please let me sleep it's Christmas time.

This song inspires so much sadness that it still hurts every time I hear those words. It speaks on numerous levels but overall we get to see a man who has lost the magic that his life once possessed. The song seems to speak past just the holiday and really settle on the idea that this adult has lost something paramount in his life as he has aged.


13. A man lies in his bed in a room with no door. He waits hoping for a presence, something, anything to enter. After spending half his life searching, he still felt as blank as the ceiling at which he's staring. He's alive, but feels absolutely nothing, so, is he? When he was six he believed that the moon overhead followed him. By nine he had deciphered the illusion, trading magic for fact—no tradebacks. So this is what it's like to be an adult. If he only knew now what he knew then...

I don’t really think this song needs any explanation. It is basically a poem already, laid over exquisite ambient music. It causes you to think, to meditate on where you are in your life and what you may have lost. I do think that the idea of losing something important from adolescence to adulthood is an important theme, and one that Vedder touches on quite often. Sometimes, much like Shel Silverstein said in “Where the Sidewalk Ends,” the children know something that the adults don’t. We shouldn’t cast our childhood away without regard—there are important things we need to retain to be complete.


14. You can spend your time alone redigesting past regrets or you can come to terms and realize you're the only one who can forgive yourself. Makes much more sense to live in the present tense.

Without a doubt these are my favorite lyrics of all time. There is something so wonderful about the music of the song. It builds from a hopeful musing on life into a lovely, slightly aggressive chorus chastising those who wallow in the past and refuse to move forward with their lives. It makes so much more sense to live for the day and for the present tense than to fight and strive for things that are long past and can never be recovered. Forgiving yourself is imperative if you want to live your life fully.