#NotBaconBits - Return of the Bac 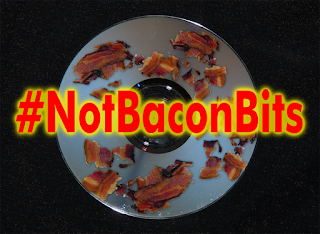 #NotBaconBits is BACK! And this time we're looking for your suggestions. Susan Omand explains more...

We got lots of great feedback when we tried this back as a strand of Song of the Day in the autumn for a week, so now #NotBaconBits is BACK [Does that make it back bacon? NO, it doesn't - Ed] as a permanent fixture in its own right but we'll need your help. Yes, it's up to you, our reader, to suggest possible songs to link to by tweeting us or leaving a comment on our Facebook posts. As always, if we use your idea we’ll credit you in the article and give you a shout out on social media – but, as with all good answers, you MUST explain your workings.

So what is #NotBaconBits and where did we get such an .... um.... unusual name from?

They say imitation is the sincerest form of flattery. Well, I hope that Classic FM’s weekday Breakfast show, presented by the inimitable Tim Lihoreau, is incredibly flattered as we “borrowed” the idea from them. Just before half seven every morning, Tim plays the Breakfast Serial (serial/cereal - geddit?) – a classical track that is, in some way, linked to the previous day’s Breakfast Serial offering, whether that link is to do with the title, the composer, the orchestra or something even more obscure. But, because we’re not just a Classical Music site, we’ve decided to expand over all the music genres, so you may get a rock track linking to a jazz track, linking to a 15th century madrigal (we will try at some point!) and you must be able to explain the link between one track and your choice for the next one step by step. It can be as simple or as contrived as you want - in fact the more contrived the better!

The name? That came from a few online discussions in our trial week. We obviously couldn't call it the Breakfast Serial as that's been done, so someone suggested continuing the theme and going for Bacon Bits (bacon rolls being their obvious go-to morning food) and I backed it up with using the 7 Steps to Kevin Bacon idea. This didn't meet (meat?) with universal approval (and apparently it's six degrees not 7 steps - who knew?) so we asked for more suggestions on Twitter with the hashtag #NotBaconBits.... and it just kinda stuck. One of our regular readers @JimJamGin also reminded us of the quiz from the Radio One Roadshows back in the day called Bits & Pieces so that settled it.

Where to start though? Our trial week ended with the sublime rendition of Tchaikovsky's 1812 Overture from the film V for Vendetta so that's the song we'll start with. Tweet us @albiemediaAM with the #NotBaconBits hashtag or add your suggestions in the comments of our #NotBaconBits Facebook posts - remember the link can be as simple or complicated as you want, in any music genre (it doesn't have to be classical) and you can link to anything about the song - Tchaikovsky maybe, Dario Marianelli, 1812 (or quarter past six), cannons, fireworks, the letter V, someone in the film? The choice is yours.