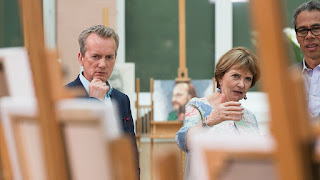 Imelda Staunton sits for the semi-final which will air in the seventh week of the show and the week after is the final with Tom Courtenay. The prize portrait commission for the winning artist will be television presenter and comedian Graham Norton.

Each of the celebrity sitters got to choose one of the finished portraits to keep for themselves – regardless of whether that artist went through to the next stage. According to previous artists that’s the beauty of the show - that the ‘taking part’ has been life changing for their business and profile.


This is the third series of the show, which is produced by London and Glasgow-based independent production company Storyvault Films and is presented by TV personality and comedian Frank Skinner, alongside presenter and journalist Joan Bakewell - a leading figure in the arts for nearly six decades. The returning judges are artist Tai Shan Schierenberg and independent curator Kathleen Soriano and art historian Kate Bryan.

Frank Skinner said: “The relationship between a portrait artist and their subject is a very intimate one. I love being able to, along with the viewers, stick my nose in and watch the whole stress-filled process unfold.”

Joan Bakewell added:“Portrait Artist of the Year brings together some of the most talented painters with some of the most striking personalities. We see artists use brush, paint, pastels, charcoal to capture the elusive beauty of people whose faces we think we know. But art reveals more: and in each programme we watch it happen.”

All six heats were filmed in the courtyard of The Wallace Collection in London’s Manchester Square, home to one of Europe’s finest art collections. The winner of the previous series was Christian Hook who was crowned ‘Portrait Artist of the Year 2014’ with his stunning portrait of Sir Ian McKellen. 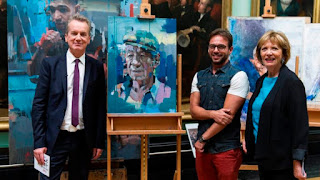 Hundreds of entries were received for this series, giving the judges the difficult task of whittling them down to just 54 artists (9 per heat). The winner of Portrait Artist of the Year is awarded a £10,000 commission and £500 to spend on art materials at Cass Art.