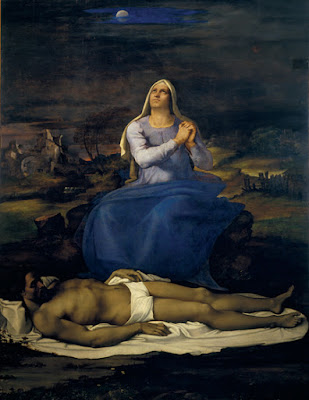 This spring, the National Gallery in London presents the first ever exhibition devoted to the creative partnership between Michelangelo and Sebastiano del Piombo...

The Credit Suisse Exhibition: Michelangelo & Sebastiano explores the complementary talents, yet divergent personalities, of the two artists. It encompasses approximately seventy works – paintings, drawings, sculptures and letters – produced by Michelangelo and Sebastiano before, during and after their association. Examples of their extensive, intimate correspondence offer us a unique insight into their personal and professional lives; their concerns, frustrations and moments of glory.

In 1511, Sebastiano, a young, exceptionally talented Venetian painter, arrived in Rome. He was quickly embroiled in the city’s fiercely competitive art scene. He met Michelangelo, who was working on the Sistine Chapel ceiling, and the two quickly became friends and allies against the prodigious Raphael; another recent arrival whose star was rising with the most influential patrons in Rome. As the only oil painter in the city to rival Raphael, Sebastiano was an ideal collaborator for Michelangelo, who did not care for the medium but wanted to marginalise his younger competitor. For his part, Sebastiano profited immensely from Michelangelo’s drawings and conceptual ideas. Together they created several works of great originality and rare beauty.

Their friendship lasted over twenty-five years, far beyond Michelangelo’s long-term relocation to his native Florence (1516) and Raphael’s death (1520). It ended acrimoniously after Michelangelo’s permanent return to Rome to paint the 'Last Judgement' in the Sistine Chapel, apparently with an argument over painting technique. Their partnership unfolded during a remarkably dramatic time for Italy – one of revolution, war and theological schism, but also of great intellectual energy and artistic innovation.

A key loan to the exhibition (pictured above) is the 'Lamentation over the Dead Christ', also known as the Viterbo 'Pietà' (about 1512–16) after the central Italian town where it resides. This painting is Michelangelo and Sebastiano’s first collaboration and eloquently represents their combined vision. Rarely seen outside of Italy, it is also the first large-scale nocturnal landscape in history, iconographically original for its separation of Christ from his mother’s lap.

In its time, the Viterbo 'Pietà' was received with widespread praise, and on its merits Sebastiano garnered his next two major commissions, both of which were completed with Michelangelo’s input – the decoration of the Borgherini Chapel in S. Pietro in Montorio, Rome (1516–24) and The Raising of Lazarus (1517–19). The latter was painted in competition with Raphael’s great 'Transfiguration' (now Vatican Museums) for the Cathedral of Narbonne, France, from which it was removed in the 18th century. 'The Raising of Lazarus' eventually became part of the foundational group of paintings forming the National Gallery Collection in 1824, where it was given the very first inventory number, NG1.

Recent scientific research conducted at the National Gallery has provided new insights into the two artists’ respective work on 'The Raising of Lazarus'. Infrared reflectography has revealed Sebastiano’s contribution to be more substantial and independent of Michelangelo’s influence than previously assumed. It is now understood that Michelangelo only intervened at a relatively advanced stage in the painting’s development, revising in drawings the figure of the revived Lazarus, which Sebastiano had already painted.

Among other exhibition highlights is 'The Risen Christ' by Michelangelo, a larger-than-life-size marble statue carved by Michelangelo in 1514–15, generously lent by the Church of S. Vincenzo Martire, Bassano Romano (Italy). 'The Risen Christ' will be shown with a 19th-century plaster cast after Michelangelo’s second version of the same subject (1528–21), which resides in – and never leaves – the S. Maria sopra Minerva, Rome. Never attempted before, this juxtaposition presents visitors with the first ever opportunity to see these statues side by side.

Sebastiano’s 'Visitation' from the Louvre, Paris, and the 'Lamentation over the Dead Christ' from the State Hermitage Museum, St Petersburg, will also leave their collections for the first time to travel to Trafalgar Square. The latter will be united with Sebastiano’s 'Christ’s Descent into Limbo' (1516) from the Museo del Prado, Madrid, and Francisco Ribalta’s 17th-century copy of Sebastiano’s lost 'Christ Appearing to the Apostles'. The three paintings will be presented in their original triptych format for the first time since they were separated in 1646.

To evoke the experience of seeing the works in situ, groundbreaking technology will be used to present a spectacular three-dimensional reproduction of the Borgherini Chapel in S. Pietro in Montorio, Rome. Using the most advanced digital imaging and reconstruction techniques, the National Gallery will bring the chapel to London for an immersive experience of the structure much as it was created.

“This is the first exhibition of its kind anywhere, and the first to showcase the work of Sebastiano in the UK. Although highly esteemed among collectors in the 19th century, Sebastiano has since slipped from our awareness in large part due to his close association with Michelangelo, Raphael and Titian. I hope this will encourage a new look at this tremendously original artist, while highlighting an overlooked aspect of Michelangelo’s activity,” said Matthias Wivel, curator of 'The Credit Suisse Exhibition: Michelangelo & Sebastiano'.

Director of the National Gallery, Dr Gabriele Finaldi, added, “The exhibition introduces us into the very heart of High Renaissance Rome, where a new and heroic art was being forged. Against a background of war and religious conflict Michelangelo and Sebastiano produced works about life, death and resurrection which are among the most powerful and moving ever made. This is a unique opportunity to see an exceptional gathering of masterpieces.”

The Credit Suisse Exhibition: Michelangelo & Sebastiano is on from 15th March – 25th June 2017. For more information and to book tickets, please visit the National Gallery website.