News - The Message of the Forest 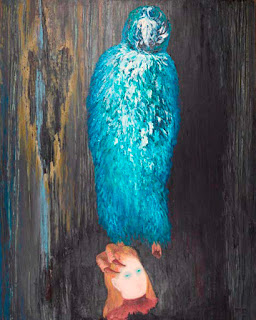 A major painting by one of the legendary figures of Surrealist art has been acquired by the Scottish National Gallery of Modern Art in Edinburgh and will go on public display for the first time this week...

The Message of the Forest, which was painted in 1936, is widely acknowledged to be the greatest work by the Czech artist known as Toyen, and is the first of her paintings to enter a UK public collection. It was acquired with support from the Walton Fund and Art Fund.

Born Marie Čermínová in 1902, Toyen was the most celebrated member of the group of Surrealist artists based in Prague, a major centre of Surrealist activity in the 1930s.

In 1923, while seated in a café, the artist declared that henceforth she would be known simply as ‘Toyen’. She didn’t explain her reasons. One idea is that the name derived from the French word ‘Citoyen’ (citizen) and gave her a non-gendered identity; another is that it is a play on the Czech words ‘To je on’, which means ‘It is he’. Throughout her life the artist referred to herself using the masculine form in her native Czech. Famously, she cut her hair short and cross-dressed, often wearing coarse working men’s clothes. Her androgyny and exploration of gender stereotypes have made her a cult figure in recent years.

The Message of the Forest depicts a huge blue bird – seemingly an owl or a bird of prey – which stands against a dark, mysterious, wooded background, the ‘forest’ of the title. One of the bird’s feet has been cut off; the talons of the other foot clutch the severed head of a girl. The bird and forest have been built up with thick, textured paint, contrasting with the pale complexion and more realistic treatment of the head.

The subject embodies a recurring theme in Toyen’s work: that of the power of nature over the human world. Her work repeatedly centres on barren, dream-like landscapes, featuring lone girls, fragmentary female figures and birds. Her interest in these themes originates in illustrations she made for children’s books, but her work soon took on a more bizarre and sinister appearance. Toyen was careful not to ‘explain’ her work, but instead left the viewer to explore the symbolic meaning. Her works seem to respond to dreams and nightmares (she had a keen interest in Sigmund Freud’s writings) and suggest a world of intense anxiety.

From 1925-28 Toyen and her partner, the artist Jan Štyrský, lived in Paris. Returning to Prague, she was a founding member of the Czech Surrealist Group. She was supported in particular by André Breton, the leading figure in the Surrealist movement. Breton visited her in Prague in 1935 and acquired works by her. Through trips to Paris, Toyen became friendly with many of the leading figures in the French Surrealist group, including Max Ernst, Yves Tanguy and Salvador Dalí.

The Scottish National Gallery of Modern Art houses a world-famous collection of Surrealist art, including celebrated works by Joan Miró, Max Ernst, René Magritte, Alberto Giacometti and others. Much of the collection came from two sources: Gabrielle Keiller and Roland Penrose. Their collections were strong on French-based Surrealism but neither had much work by women Surrealists, who constituted an important part of the Surrealist movement, or anything by the Czech groups.

The acquisition was made possible thanks to support from the Walton Fund and the Art Fund. Henry Walton (1924-2012) and Sula Walton (1924-2009) were psychiatrists and art collectors who lived in Edinburgh and were closely involved with the National Galleries of Scotland. They established a charitable fund specifically to support the Gallery of Modern Art in making new acquisitions. The Art Fund also gave a significant sum towards the acquisition.

Simon Groom said: ‘The Scottish National Gallery of Modern Art is known internationally for its world-class collection of Surrealist art. There are however, three things to note about the collection: firstly we have few works by women Surrealists; secondly we have nothing by the Czech Surrealists; and thirdly much of what we do have dates from around 1936, when the celebrated International Surrealist exhibition was staged in London, and Roland Penrose, its co-organiser, bought many of the works which we now own. The Message of the Forest, Toyen’s most celebrated work, fills a big gap for us and also perfectly complements our existing collection.’

Stephen Deuchar, Director of Art Fund, added: ‘This haunting work is an excellent addition to the SNGMA’s exceptional collection of Surrealist art. There are no other paintings by Toyen or the Czech Surrealists in any other UK public collection, so we are very pleased to be supporting such an important acquisition, for both the museum and its visitors.

Image - Toyen (Marie Čermínová) 1902-1980 The Message of the Forest, 1936 Oil on canvas, 160 x 129cm Purchased with help from the Henry and Sula Walton Fund and the Art Fund, 2016
Email ThisBlogThis!Share to TwitterShare to Facebook