News - Hokusai: Beyond the Great Wave 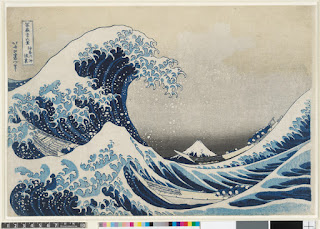 In May of this year the British Museum will stage the first exhibition in the UK to focus on the later years of the life and art of Hokusai...

Katsushika Hokusai (1760-1849) has long enjoyed a strong international reputation and is considered by many to be Japan’s greatest artist. Hokusai: beyond the Great Wave, featuring his iconic print ‘The Great Wave’ of c. 1831 and continuing to the sublime painted works produced right up to his death at the age of 90,will provide new insight into the prodigiously productive last thirty years of Hokusai’s life and art from around 1820 to 1849. 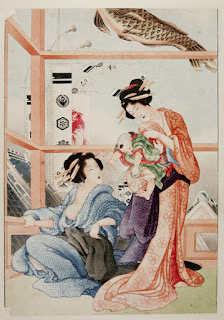 The exhibition will adopt a new approach to explore Hokusai’s later career in thematic as well as chronological terms. The exhibition will shed light on Hokusai’s personal beliefs and his spiritual and artistic quest through major paintings, drawings, woodblock prints and illustrated books. Many have never been seen before in the UK and can only be displayed for a limited length of time. From iconic landscapes and wave pictures to deities and mythological beasts, from flora and fauna to beautiful women, from collaborations with other painters and writers to still lives – the works on show will be extraordinarily varied, with objects drawn from the British Museum’s superb collection and many loans from Japan, Europe and the United States. There will be a rotation of about half the artworks midway through the exhibition run for conservation reasons. Due to their light sensitivity some works can only be displayed for a limited amount of time, to preserve the vivid colours. Each rotation will tell the same story, but there will be the opportunity to see a selection of different works in each half. The exhibition will feature around 110 works in each rotation. The exhibition will be temporary closed from 3-6 July 2017 for this rotation. 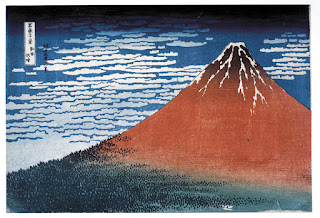 Hokusai’s most iconic print, ‘The Great Wave’ will be featured, a fine, early impression acquired in 2008 by the British Museum with the assistance of the Art Fund. Hokusai created this world renowned masterpiece when he was about seventy. Mt Fuji and its wider spiritual significance was a model for Hokusai in his quest for immortality during his later years. The print series Thirty-Six Views of Mt Fuji (published around 1831-33) revived Hokusai’s career after personal challenges of the late 1820s. 'The Great Wave’, with its use of deep perspective and imported Prussian blue pigment, reflects how Hokusai adapted and experimented with European artistic style. Also shown will be a rare group of paintings from the National Museum of Ethnology, Leiden, done in a unique European-influenced style, which were commissioned from Hokusai by employees of the Dutch East India Company in about 1824-1826. 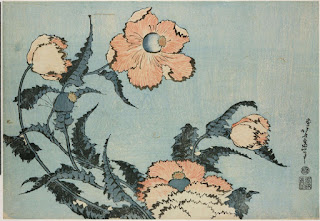 Throughout his career, and particularly in the later years, Hokusai’s paintings brought vividly to life an extraordinary bestiary of dragons, Chinese lions, phoenixes and eagles, and forcefully energised depictions of mythological figures and holy men. He also continued to use landscape and wave imagery as a major subject and he became increasingly interested in exploring in his art the mutability and minutiae of the observable world -- particularly birds, animals and plants and other natural subjects. Hokusai based his exploration of the outside world on his subjective identification with his surroundings rather than any objectively 'scientific' or technical approach. 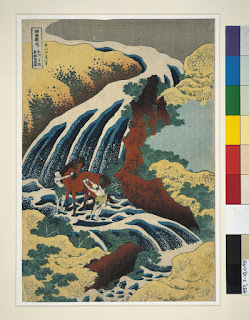 For Hokusai and his contemporaries the perceived world could connect seamlessly with a world of powerful ‘unseen’ forces and agencies. Ghosts and vengeful spirits inhabited a closely parallel world that was believed could easy spill into ours. The exhibition will display a magnificent hanging loan from the Metropolitan Museum in New York Red Shōki, the demon-queller, who could protect your home against the scourge of smallpox. 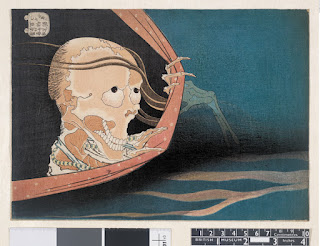 In the late 1820s Hokusai suffered many personal challenges, including the death of his wife, illness, and financial woes caused by an errant grandson. His daughter Eijo (art name Ōi, about 1800-after 1857), herself an accomplished artist, quit an unsuccessful marriage to return and care for her aged father, and to work with and alongside him. The exhibition will explore their modest living circumstances, displaying their portraits and drawing on the recollections of Hokusai’s pupils. The artist considered that he was passing on ‘divine teachings’ to his pupils, to craft artists and to the world. He published numerous brush drawing manuals, notably Hokusai manga (Hokusai's Sketches, 15 vols, 1814-1878) which spread his artistic style and reputation widely into society. 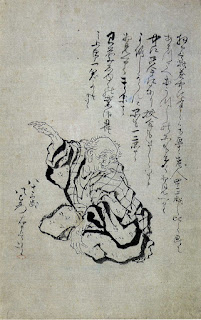 The exhibition will feature two magnificent painted ceiling panels of wave subjects loaned by Hokusaikan, Obuse, done in 1845 for a festival cart. From his eighty-eighth year until his death at age ninety, Hokusai’s extraordinary last painted works show that the artist had indeed reached a sublime realm in his beliefs and art. He fervently believed that his skills as an artist would continue to improve the older he got and and impressed all these last paintings with a talismanic seal reading 'Hundred'. 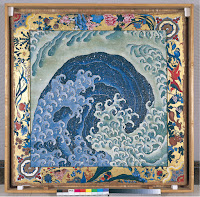 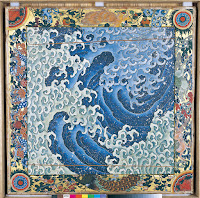 The exhibition results from a close curatorial collaboration with Dr Shūgō Asano, leading Hokusai scholar and Director of the Abeno Harukas Art Museum, Osaka, where a similar exhibition Hokusai – Fuji o koete will be shown from 6 October – 19 November 2017. 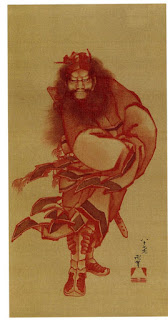 Hokusai: beyond the Great Wave  is on at the British Museum from 25 May – 13 August 2017 – see the website for more details and how to book tickets.

1 Under the wave off Kanagawa (The Great Wave) from Thirty-six views of Mt Fuji. Colour woodblock, 1831. Acquisition supported by the Art Fund. © The Trustees of the British Museum. On display from 25 May - 13 August.

3. Clear day with a southern breeze (‘Red Fuji’) from Thirty-six Views of Mt Fuji. Colour woodblock, 1831. © The Trustees of the British Museum. On display from 25 May - 13 August.

5. The waterfall where Yoshitsune washed his horse in Yoshino, Yamato province from Tour of Waterfalls in Various Provinces. Colour woodblock, 1833. Bequeathed by Charles Shannon RA. © The Trustees of the British Museum. On display from 7 July - 13 August.

6. Kohada Koheiji from One Hundred Ghost Tales. Colour woodblock, 1833. Purchase funded by the Theresia Gerda Buch bequest in memory of her parents Rudolph and Julie Buch. © The Trustees of the British Museum.On display from 25 May - 13 August.

7. Self-portrait, aged eighty-three. Drawing in a letter, ink on paper, 1842. National Museum of Ethnology, Leiden. On display from 25 May - 13 August.