News - The American Dream: pop to the present 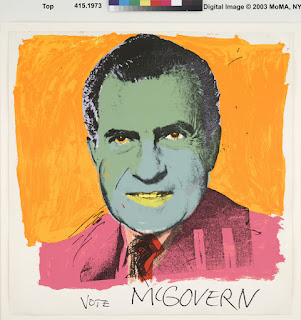 The UK’s first major exhibition to chart modern and contemporary American printmaking will be held in the spring at the British Museum ...

The American Dream: pop to the present will explore the creativity of a medium that flourished through some of the most dynamic and turbulent years in US history and that accompanied a period when its wealth, power and cultural influence had never been greater.

The exhibition will include important loans from institutions such as New York’s Museum of Modern Art and the National Gallery of Art, Washington DC as well as works drawn from the British Museum’s extensive collection of prints. Using more than 200 works by 70 artists, the exhibition will trace the creative momentum of American art over the past six decades – from the moment pop art burst onto the New York and West Coast scenes in the early 1960s, through the rise of minimalism, conceptual art and photorealism in the 1970s, to the practices of living artists working today.

Many of America’s greatest artists will feature, including Jasper Johns, Robert Rauschenberg, Ed Ruscha, Chuck Close, Louise Bourgeois, Kara Walker and Andy Warhol, all of whom engaged with printmaking to create some of the most enduring images of recent years. The exhibition will explore the innovative techniques and unprecedented scale, boldness and ambition that made American printmaking an ideal expression of the USA’s power and influence, as well as how the medium addressed contemporary social issues such as race, AIDS, and feminism. Large prints designed to be seen en masse, such as Warhol’s Marilyn, the minimalist linear inflections of the sculptor Donald Judd or the monumental woodcut Stowage by the African American Willie Cole on the legacy of slavery, will be shown alongside those on a smaller, more intimate scale, including artists’ books by Ed Ruscha, Ida Applebroog and others. Some American artists made prints that related closely to their work in other media, and this crossover will be shown in works such as Andy Warhol’s Little Electric Chair painting alongside his series of ten screenprints of the same subject and Claes Oldenburg’s sculpture of the Three-Way Plug juxtaposed with his Floating Three-Way Plug etching. 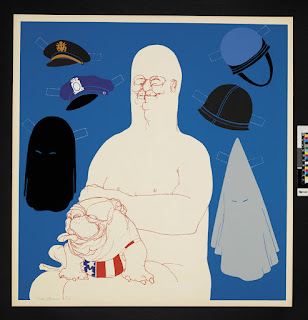 A revolutionary and enduring change in the production, marketing and consumption of prints took place in the 1960s. Inspired by the monumental, bold and eye-catching imagery of post-war America, a young generation of artists took to printmaking with enthusiasm, putting it on an equal footing with painting and sculpture and matching their size, bright colour and impact. Meanwhile, the growth of an affluent middle class in urban America also opened a booming market for prints that was seized upon by enterprising publishers, print workshops and artists. Artists were encouraged to create prints in state-of-the-art workshops newly established on both the East and West Coast. The widening audience for prints also attracted some to use the medium as a means for expressing pungent, sometimes dissenting, opinions on the great social issues of the day. American prints provide a vivid and varied commentary on a period of great change for US society. Works celebrating America’s famed enterprise and ingenuity include Rauschenberg’s rocket-sized Sky Garden from his Stoned Moon print series (marking the 1969 moon landings) whilst other works touch on darker themes such as President Kennedy’s assassination in 1963, the Vietnam War, the struggle for civil rights, the AIDS crisis and issues of gender and identity.

The confidence and assertiveness of America in the post-war boom years has given way to a gradual disintegration of the American Dream as the very notion of the country’s exceptionalism has been critically questioned by artists. The creative momentum unleashed in the 1960s persists to this day as American artists continue to explore the vital and expressive potential of printmaking as an integral part of their aesthetic, with its ability to reach a broader audience and address wider social and political issues.

Hartwig Fischer, Director of the British Museum said “The American Dream is an extremely exciting project for the British Museum, highlighting our extraordinary holdings of American prints and drawings. The Museum has been building up this collection of modern and contemporary works since the hugely successful exhibition The American Scene: Prints from Hopper to Pollock in 2008, and we are very grateful to Morgan Stanley and the Terra Foundation for helping us to stage this ambitious show. As a new President enters the White House and another chapter of US history begins, it feels like an apposite moment to consider how artists have reflected America as a nation over 50 tumultuous years.”

The American Dream: pop to present runs from 9th March – 18 July 2017 at the British Museum

For more information and to book tickets, visit www.americandreamexhibition.org

May Stevens (b. 1924), Big Daddy with Hats. Colour screenprint, 1971. © May Stevens. Reproduced by permission of the artist and Mary Ryan Gallery, New York
Email ThisBlogThis!Share to TwitterShare to Facebook