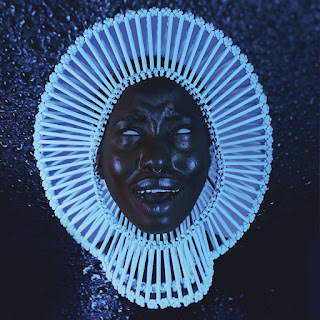 As we head towards the dawn of 2017, it's tempting to think that 2016 has been an all-round awful year... however, Nate McKenzie gives us some great music to look back on with his Top 5 albums of the year. And at number 3 is...

Childish Gambino is the rap alter-ego of Donald Glover. Glover was the glue that held together the cast of Community for not-quite-six-seasons-and-a-movie, a comedy writer and stand up comedian; and he will be starring in the coveted role of Lando Calrissian in the upcoming Han Solo origin film. Oh, and if you haven't heard, he also wrote and starred in the best new show on television this past fall, Atlanta.

Donald Glover is many things, but whatever he isn't Childish Gambino has been allocated to be, vicariously. However, with "Awaken, My Love!" Glover and Gambino have come to a crossroads and merged into a wholly new entity.

Full of R&B, 70s funk, soul, and rock, the tracks from "Awaken, My Love!" are diverse. Instead of painting a picture individually, they create a panoramic mural that encompasses your entire head. The album is something unto itself, but if forced to compare it for reference, I would say it reminds me of an amalgam of Prince, Isaac Hayes, Lenny Kravitz, mixed into a Speakerboxxx/The Love Below dual album type of concoction. The result is an album that will keep you on your toes - whether you be dancing, tapping or contemplating the music in an existential way.

Redbone has been getting the majority of praise but Me and Your Mama was the first single released and my personal favourite from the album. Whether you love or hate "Awaken, My Love!", you're sure to feel some kind of way. Eliciting emotion is, after all, the entire point of music itself.