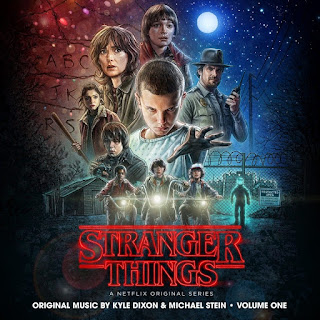 As we head towards the dawn of 2017, it's tempting to think that 2016 has been an all-round awful year... however, Nate McKenzie gives us some great music to look back on with his Top 5 albums of the year. And at number 4 is...

Late last summer I wrote that Stranger Things "feels not like a movie set in the 80s but like a movie made in the 80s." The same can be said about the official soundtrack. From the minds of 2 of the 4 members of Austin-based band SURVIVE, the original score from the Netflix hit show is as haunting as the show itself. Laden with emotion, introspection and revelation, the Stranger Things OST is a rare thing: a soundtrack that could easily stand alone as a full album. Its concepts are inspired by the narrative of the series, and the 1980s in which the show is set; the complete product sounds like the music that mythical creatures would play while frolicking through the woods in a world where humans don't exist.

Luckily for us, Dixon and Stein do exist and the Duffer Bros. discovered their talents to create the greatest 1-2 visual/audio combo since John Williams teamed up with... well, anyone he teamed up with.