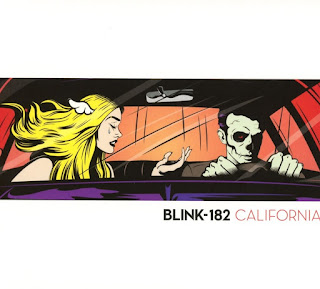 As we head towards the dawn of 2017, it's tempting to think that 2016 has been an all-round awful year... however, Nate McKenzie gives us some great music to look back on with his Top 5 albums of the year. And at number 5 is...

When Bored To Death was released, I wrote that it was a bit bland. The song grew on me and it is now a staple on my long drive playlist. The rest of California is where the album earns high praise from me. From the bass driven, heavy hitting sound of The Only Thing That Matters to the Emo anthem Home Is Such A Lonely Place to the best song on the album She's Out Of Her Mind, California has everything you want from a blink album... except Tom DeLonge. No matter, Matt Skiba has paid his dues and earns the respect of even the most devout DeLong acolyte. This band has many years and at least a few more great albums in them.

Check out the ridiculous and hilarious video for She's Out Of Her Mind below. If you're not a long time fan (or you didn't watch TRL in the late 90s) you might not realize that the new video is a recreation/tribute to the band's What's My Age Again music video. The original is a classic but the new version does a great job paying homage to its origins - much like the band itself.