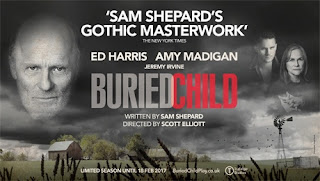 As a movie actor, Ed Harris has a CV as long as your arm: The Abyss, Glengarry Glen Ross, The Right Stuff, Apollo 13, Appaloosa, The Rock, A History of Violence, The Truman Show… the list goes on and on. He is a talented and solid actor that raises the calibre of any movie he appears in.

Now, at the age of 66, Harris makes his London stage debut alongside his wife, the delightful Amy Madigan, (a double-coup) in Sam Shepard’s Pulitzer-prize winning family drama from 1978, Buried Child.

Ed Harris plays Dodge, a once fearsome patriarch, decimated by age and ill health, who has almost merged into the faded sofa from which he never moves. Now gaunt and grizzled, he sips whisky from a bottle he has hidden under his cushion, adjusts his ever-present baseball cap and listens wearily to the self-involved chatter of his wife, Halie, upstairs. She is ostensibly a god-fearing, religious woman, determined to have a monument erected to her idealized dead son, Ansel.

We meet their two surviving sons, only to see that are also impaired – mentally, in the case of their eldest son Tilden, (Barnaby Kay) who wanders in, child-like, bearing arm-loads of corn from the apparently barren backyard of their Illinois farm, and obsessing over the past death of an infant, and physically, in the case of son Bradley, (Gary Shelford) who has an amputated leg and is given to bouts of spite, envy and erratic behaviour.

With the arrival from New York of Dodge’s swaggering, leather-jacketed grandson, Vince (Jeremy Irvine) and girlfriend Shelly – the strangeness of this family becomes manifest. None of them seem to recognise Vince, least of all Tilden, his father.

Girlfriend Shelly (played by Charlotte Hope with buoyant resilience) is confused, dismayed, and disturbed to find that, instead of the normal family gathering she expected, she is faced with a clan of oddly behaving grotesques - but the increasingly angry Vince refuses to leave.

Coughing like an old engine, Dodge plays up his decrepitude and persuades Vince to go out and buy him another bottle. However, by his subsequent exchanges with Shelly and his frequent sardonic interjections, it’s clear that nothing really escapes him - he takes everything in. He glares at his sons – men made infantile and dependent. Unlike his wife, he has the measure of Bradley’s malice and Tilden’s bewilderment, and harbours no illusions about their dead son, Ansel.

When Vince eventually returns the following morning, drunk and ranting, and Halie comes back from an overnight spell at ‘church’ accompanied by the pastor, galvanised by Shelly’s curiosity and tired of the pretence, Dodge finally spills all the secrets. Metaphorically and literally, skeletons from the past are brought to the surface, revealing the truth – the gothic horror at the heart of this family’s fundamental dysfunction.

Buried Child was first presented in 1978 and won the 1979 Pulitzer Prize for Drama. It established actor Sam Shepard in his second career as a playwright. Shepard’s play is all about skeletons in closets and unnatural acts that are brushed under the carpet, never to be spoken of.

The postmodern style that Shepard uses incorporates symbolism in the realistic framework of a family drama. The play may be said to depict the fragmentation of the American nuclear family in a context of disappointment and disillusionment with the ‘American Dream’. The play may have been written in the Seventies but it is just as pertinent to the Trump-era, dealing as it does with a country struggling to regain an (illusory) sense of self amid wars, economic hardship, masculinity in crisis and the erosion of what are seen as traditional values.

The thing I find whenever I see a play by Sam Shepard, is how he seems to wear his influences on his sleeve. Buried Child comes across rather like ‘Eugene O'Neill meets Harold Pinter by way of Tennessee Williams, with a touch of Shirley Jackson thrown in for good measure’ and as always, it is deeply entrenched in Americana and some kind of notion of a ‘Paradise Lost’. I’m not a huge fan of Shepard but Ed Harris and Amy Madigan alone are probably worth the entrance fee.

Buried Child is playing at Trafalgar Studio One until Feb 18 with tickets available here. (Be warned: the play has two mini-intervals which extend the evening out to almost three hours).