Review - All Aboard! The Sleigh Ride 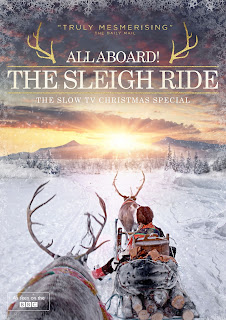 Susan Omand, replete with cosy blanket and a mulled wine,  watched the “slow TV” of All Aboard! The Sleigh Ride on DVD for /Garbage-file. Now the beautifully artistic film is coming to BBC Four on Christmas Eve...

‘All Aboard! The Sleigh Ride’ follows the path of an ancient postal route, showing the traditional world of the Sami people who are indigenous to northern Scandinavia. The journey captures breath-taking scenery, normally not glimpsed by anyone other than the Sami. An epic two-hour trip capturing undulating snowy hills, birch forests and traditional Sami settlements.

My first thought as I pressed Play on this DVD was, “I should have refilled my mulled wine glass.” My second was, “Is this really going to be two hours of staring at a reindeer’s arse?” Well, yes and no. You may not remember, for I am old, that you used to get DVD’s, back in the early days of the technology, that were tropical fish in an aquarium or a burning log fire – this film is kind of like that but much better, as long as you are in the right mood for it. Yes, for two hours you follow a reindeer sleigh through the wondrous landscape of northern Norway, 200 miles north of the Arctic Circle, but it’s only as boring as you make it. The views, in the twilight of a winter day when the sun doesn’t lift above the horizon, are stunning – the colours in the sky, the reflections of well worn tracks and the contrasts between trees and snow are amazing. You see them from the viewpoint of sitting in the sleigh, but also looking behind the sleigh and some amazing aerial shots taken by a drone from high above. There’s always little bits and pieces to watch too – skiers going past, nomads randomly sitting beside the fire boxes that light the edge of the snowy road, somebody ice fishing with a reindeer antler and so on. And there are very interesting factoids that appear in the landscape as if from nowhere, like the very descriptive words that the Sami, the indigenous people of the area, have for reindeer and snow, the fact that the forest there completely circles the earth and has a third of all the trees on the planet and that domesticated reindeer have to wear bells because their horns don’t work (OK, I may have made that last bit up, but it does tell you why they wear bells).

The best thing for me though was that there was no intrusive narration or incidental music, which would only have spoiled the restful, almost hypnotic, shoosh of the sleigh runners and the steady rhythmic crunch of reindeer feet on snow (I have a new fascination for reindeer feet now by the way – watch and see) punctuated by little side conversations between the sleigh handlers and the passers-by, conversations that you didn’t need to understand, it was just another layer of sound to lull you.

And of course they save the very best, to my mind, until last, as night falls. The universe is truly an amazing thing.

So forget the fact that this is being hyped as just a Christmassy thing with the horrendous marketing line of “getting hygge with it” (Really? I mean... REALLY??) – this DVD is about as far as you can get from the loud, brash, tinsel filled, faked joy of commercialised tat that the festive season has become for so many. This taps in to something much older, more mystical, more basic in human nature. This will be two hours that you can spend reconnecting with the true spirit of the season and, for once, that’s not at the bottom of a mulled wine glass.

ALL ABOARD! THE SLEIGH RIDE was released on DVD on Monday 21st November by Nordic Noir & Beyond. It will be on BBC Four from 7pm on Christmas Eve.