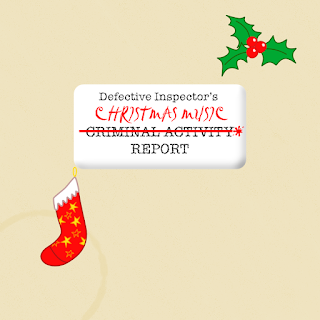 It's now Christmas Eve (in the drunk tank) so we made the Defective Inspector put on a paper hat and wrap his clipboard in tinsel to remind us of his five Best and Worst Christmas Songs...

Christmas is a painful time of year for me, not for a meaningful or emotional reason but more I am a hateful man inside wanting to poke the eye of every festive man, woman and child. Though the distaste of this holiday is 3 ghost provoking I always find myself in a mixed mood when it comes to the music. Some songs are so ridiculously catchy and enjoyable I find myself singing them all year round while others are more cancerous than catchy. So to celebrate/berate this holiday I bring you my 5 Best/Worst Christmas songs...

There are not enough bands in the world which could be called “Celtic Punk” and so this must go on the list first and foremost. The begrudging acceptance of the season is admirable and reflective of my mood during December so I can’t help but love it. It is also one of the few songs in the world which can say “faggot” and “arse” without being back handed by the BBC censorship patrol. Personally I think it’s because they cannot understand the accent…

Tis the season and the season is about getting your heart broken, stepped on and buried into the backyard. This droning melange of lost love is downright painful as every bloody year Georgy Boy gives away his heart proclaiming “This year I’ll give it to someone special” only to come back and f*** it up again. This isn’t even a Christmas thing, it’s just a bad annual failure at romance.

I find it really hard not to like Bing Crosby’s work in general, the man’s voice was just soothing to the soul. Even in the merriest format he seemed to make me happy to the point I will sing this song in public when snow falls on my traditionally snow-less patch of land. It’s also survived from the middle of World War 2 up until this very day, which is the sign of a true classic Christmas tune.


4th WORST - Mariah Carey – All I Want for Christmas (Is You)

GOD I hate this song, even more so as it’s considered one of the most successful Christmas song in my homeland. The endless spew of loving one particular person at Christmas is bad enough (Considering the season is meant to be about giving/family/bearded messiahs) but it’s so fake it burns my heart. It is my firm belief it caused the high divorce rate since 1994 from excessive and hasty marriage proposals stems from this song. By Easter all they want is a hasty separation.

It’s hard not to mention this song, it was born off the back of the 70s where cheer had an increased VAT attached to it. The song was written in defiance of the bad times and only promoted the goodwill of Christmas without really going into it much. It’s overflowing with platitudes, played on a guitar and has a crowd pleasing yell at the end where all the family, half drunk on mulled wine, can scream along to. Screaming and booze are pillars of Christmas in my personal opinion.

Let me make this really clear, the message it sends is wonderful! But this song has lost its meaning, so every time it comes on I feel sick to my stomach. In the UK we have a swarm of people singing this song while also wanting to reduce foreign aid to other countries. Not only that but the song must be heard and understood around the world by not considering the English language is a dominating force to be reckoned with. So it just comes across as condescending and a little insulting to everyone involved. They even did it AGAIN in 2014 just to make sure the message hasn’t been nailed into the world enough… It also gave Cliff Richards another chance to suckle the Christmas teat, like that shrivelled man goblin hasn’t taken enough….

This song has been covered a few times and regardless of who does it I always find myself giggling. Why giggle? Well if you read the lyrics without the playful flirting undertone it just looks like the script for a sexual assault testimony. In fact the music video Tom Jones appears to be the devil using some odd poison to trick her… So to turn something which could EASILY be a lecherous old man trap into a catchy and enjoyable sing-a-long where couples end up doing it for karaoke… Well it’s hard not to giggle isn’t it? For the hours of entertainment they’ve given me, I pick this as number 2.

Age is not a factor here at all, the high frequency ear raping vocals of tiny fury orphans have been around since the late 50s. To add pure insult to injury it returned again in the modern day with some god awful CGI movie where Banky Edwards is tortured by his mistake in movie casting. Worst part? Technology has sufficiently peaked since 1958, even when they re-wrote it they kept the god awful squeaky devil voices. Burn in hell you furry nut gobblers!

This was painfully difficult to choose, it came up at number one for a variety of reasons. First of all it gets the spirit of Christmas without being too heavy handed which is always appealing to me. Second it involves 2 legendary singers working together to form a mega group of pure awesome-sauce. Finally the music video implies David Bowie is a con-man trying to steal a lord noble’s piano while Ken Scott waits outside in the get-away lorry ready to ride into a snowstorm with that ivory beast. Furthermore this was pointed out to me by a good friend of mine and what is Christmas without friends and family? (Awwwwwwwww)


WORST EVER - Cliff Richards – Everything… Just everything

Not a single song, oh no, there are too many crimes against humanity to let him get away with that. This final entry is pretty all encompassing as he has milked the holiday dry in his immortal lifetime. His amazing ability to suck the fun and joy out of every song he touches is almost legendary. Mistletoe and Wine almost kills me with boredom, redoing Walking in the Air was blasphemy, Winter Wonderland is a lie, Let It Snow belongs to Sammy Cahn and the list could go on. Siphoning the best of Christmas and churning out a culturally devolving tune must be the biggest insult to the season I’ve ever had the displeasure of enduring. HE is the number one and what I consider the modern day Krampus.