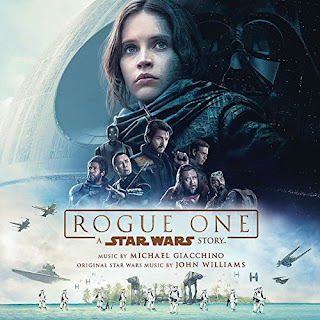 Walt Disney Records has released the Rogue One: A Star Wars Story soundtrack. Listen to all 21  tracks on our playlist below...

Michael Giacchino said, "It has been a great honour to have been asked to score 'Rogue One: A Star Wars Story' and I am humbled to have had the opportunity to contribute to the musical universe that inspired me so as a kid. Back in 1977, long before I knew I was going to be a film composer, I spent countless hours listening to the original 'Star Wars' double LP on my small RCA Stereo in my bedroom. In a sense, John Williams was my very first music teacher. All these years later, John continues to be an inspiration."

He continued, "As with all the film scores I compose, my goal is to reflect and serve the story and emotions of the film. I have to admit, the 10-year-old part of my brain had a wonderful time composing for this new and exciting set of 'Star Wars' characters and the worlds they inhabit."

Giacchino's credits feature some of the most popular and acclaimed film projects in recent history, including Marvel Studio's Doctor Strange, Disney•Pixar's Inside Out, The Incredibles and Ratatouille, as well as Star Trek Beyond, Jurassic World, Mission: Impossible - Ghost Protocol and Dawn of the Planet of the Apes. His score for Disney•Pixar's 2009 feature Up earned him an Oscar, a Golden Globe®, the BAFTA®, the Broadcast Film Critics' Choice Award and two Grammy Awards.

From Lucasfilm comes the first of the Star Wars standalone films, "Rogue One: A Star Wars Story," an all-new epic adventure. In a time of conflict, a group of unlikely heroes band together on a mission to steal the plans to the Death Star, the Empire's ultimate weapon of destruction. This key event in the Star Wars timeline brings together ordinary people who choose to do extraordinary things, and in doing so, become part of something greater than themselves.

Listen to our playlist below and let us know what you think.

Available from Amazon or iTunes