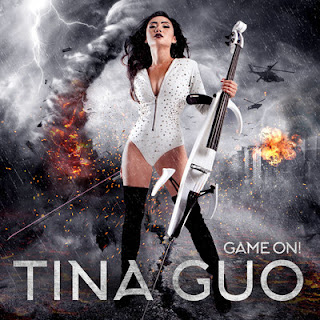 When someone asked "Have you played Pokémon?" the internationally acclaimed cellist, Tina Guo took it literally with her gaming inspired debut album Game On!...

The album showcases some of the most popular and well-known video game music around with epic orchestral arrangements led by Tina Guo's high-octane solos on electric and acoustic cello.

The video game music includes covers from top-selling games Call of Duty, World of Warcraft and Halo, together with songs from all-time classics Mario, Zelda and Final Fantasy as well as that highly irritating tune from Tetris.

Described by Sony as one of the world's most versatile musicians, Tina Guo is as much in demand as a soloist with Hollywood's top composers such as Hans Zimmer, who said has said of her playing, "When she grabs the cello, it's like a sword. She becomes Wonder Woman."

Tina Guo can be heard on the scores to several recent blockbuster films, TV shows and video games including Batman v. Superman, Inception, CSI:NY, Vikings, Call of Duty: Black Ops II and III, Assassin's Creed Syndicate and many more as well as sharing the stage at many arena events with both classical and rock musicians.

The album comes out on February 10th, 2017 and the new video for Pokémon is out now – let us know what you think.