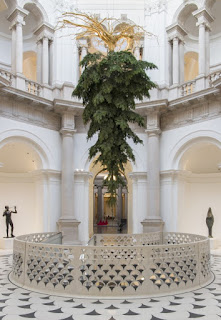 It's beginning to look a lot like.... an upside down Christmas tree?...

A Christmas tree by Shirazeh Houshiary forms the spectacular centerpiece beside a display of work by prominent British artists such as Antony Gormley, Anish Kapoor and Alison Wilding, and marks the start of a new series of festive commissions for Tate Britain. This is the first Christmas tree at the gallery since work began on the new Tate Britain, which included the reopening of the main entrance on Millbank when a striking spiral staircase was installed in the Rotunda, and continues the tradition of marking the festive period with an artist commission, by reimagining the work Houshiary created for Tate over twenty years ago.

The work, which focuses on the tree’s natural qualities such as texture, colour, smell and shape, hangs upside down from the glass ceiling in the Millbank entrance, its roots exposed and covered in gold leaf, drawing light and attention to what is usually underground. In 1993 Houshiary described her tree for Tate Britain as ‘taking earth back to heaven’. She says now, ‘I would like us to contemplate that the pine tree is one of the oldest species and recognise the roots are the source of its continued stability, nourishment and longevity. As the roots remain hidden, it is best to seek what is hidden rather than what is apparent. As a Buddhist monk wrote, ‘An old pine tree preaches wisdom’.’ The 2016 tree is suspended down the centre of the staircase, toward the public spaces below. The tree’s placement in the new space will offer the viewer an altered perspective from three levels of the gallery; the tip of the tree from the lower floor, the floating body from the ground, and the glittering roots opening out in an abstract star formation when viewed from the upper floor.

The tree is installed in the Rotunda, which leads through to the Duveen Galleries of Tate Britain, where a new display, Sculpture as Object, features work by contemporaries of Houshiary. These artists, Anish Kapoor, Antony Gormley, Tony Cragg, Richard Wentworth, Bill Woodrow, Shelagh Cluett, Richard Deacon, Jacqui Poncelet, Alison Wilding and Houshiaryemerged in the 1980s and achieved international recognition for their new approaches to sculpture. Reflected in the symbolism of the Christmas tree, Houshiary’s piece in the Duveen Gallery reinterprets western sculpture in the light of Sufi poetry and ancient writings from east and west on philosophy, religion and astronomy.Kapoor uses pure pigment to highlight the spiritual and symbolic values associated with colour; while spiritual concerns also underpin Gormley’s exploration of the physical confines of the body. Shelagh Cluett draws our attention to the physical process of fabrication, as sheets of metal are hammered or bolted into shape while Wilding similarly creates a tension between the nature of materials and their transformation into sculpture.

Alex Farquharson, Director Tate Britain said, ‘We are delighted to show Shirazeh Houshiary’s Christmas tree this year, alongside fellow prominent international UK-based artists in the Duveen Galleries. This unveiling marks a pivotal moment for the festive season at Tate Britain by looking to the past in order to look to the future. This tree fits the new space perfectly, allowing a different generation to experience the majesty of Houshiary’s work in the striking setting of the new entrance and staircase, and signals the beginning of an exciting era of annual Christmas artist commissions at Tate Britain.’

The tree is unveiled amid a host of festive performances and activities at Tate Britain. Over this weekend of the 2nd and 3rd December there will be special viewings of Tate Britain’s celebrated Turner Collection by torchlight, pop-up performances from the ENO chorus, festive tours of the collection, and children’s story-telling.