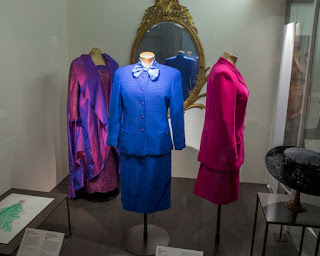 A bit of political social history on display as three notable outfits and a hat worn by the late Baroness Thatcher are exhibited in the V&A’s fashion galleries...

Worn by the former British Prime Minster at significant moments in her public and private life, they give insight into the working wardrobe of one of the most important figures in recent political history. The garments are part of a collection of six outfits generously donated to the Museum earlier this year by her children, Sir Mark Thatcher Bt., and Hon Carol Thatcher, and her grandchildren Michael Thatcher and Amanda Thatcher.

The three outfits and hat join an illustration by Ian Thomas that has long been in the V&A’s collection as part of the display. The illustration by Thomas, best known for his designs for the Queen and other members of the royal family, shows a jade georgette dress with diamanté beading that was made for Baroness Thatcher to wear to the Lord Mayor’s Banquet in 1979 – her first as Prime Minister. Thomas dressed Baroness Thatcher during her early years in power.

Throughout her life, Baroness Thatcher used her wardrobe choices to reflect her role as a stateswoman. She recalled in her 1993 memoir The Downing Street Years, “I took a close interest in clothes, as most women do: but it was also extremely important that the impression I gave was right for the political occasion”.

As leader of the Conservative Party from 1975 to 1990, blue, the party’s colour, held particular meaning for Baroness Thatcher. On display is the distinctive blue wool Aquascutum suit she wore to the Conservative Party Conference in Blackpool in 1987. She wore it again that same year to place her vote in the general election, which she won. Also displayed is a custom-designed brocade suit and taffeta opera cape with sweeping train designed by Marianne Abrahams for Aquascutum. Baroness Thatcher wore this outfit to the Lord Mayor’s Banquet at London’s Guildhall in 1988, where she gave the evening’s keynote speech. The Baroness was a strong supporter of the British fashion industry, and commissioned many of her signature tailored ‘power suits’ from the London-based firm Aquascutum.

Throughout her public life, Baroness Thatcher patronised London-based couturiers, including Tomasz Starzewski. Despite resigning as Prime Minister in 1990, she remained a prominent public figure and on display is a wool crepe suit in striking fuchsia-pink by Starzewski that she wore to the Women of Achievement reception at Buckingham Palace on 11 March 2004. The colour was a particular favourite of her husband Sir Denis Thatcher. Also displayed is the black slub silk hat with feathers and velvet-flecked tulle designed by Deida Acero, London that she wore to Sir Denis’s funeral in 2003. She chose to wear it again to the memorial service of former US President Reagan the following year.

Claire Wilcox, Senior Curator of Fashion at the V&A, said: “As a powerful woman in a predominantly masculine environment, Baroness Thatcher used her wardrobe as a strategic tool to inspire confidence and project authority. She understood the power of image, especially in a media-driven world, and inspired female leaders around the world to follow in her example. Not only do Baroness Thatcher’s sartorial choices reveal important aspects about her as a person, but the context in which outfits were worn reflect significant moments of social and political history of the late 20th century, as well as life after Downing Street.”

The display is part of the V&A’s permanent fashion galleries and is free to visit.


Image - V & A Museum
Email ThisBlogThis!Share to TwitterShare to Facebook