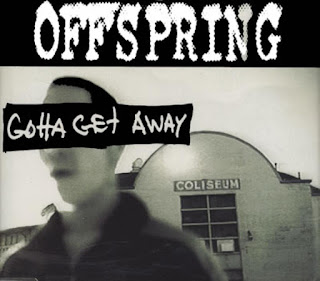 "Give me a subject to write about" said Steve Taylor-Bryant. OK, we said. Cue a 1990's themed week of Song of the Day. Today he's just Gotta Get Away...


"I'm getting edgy all the time
There's someone around me just a step behind
It's kinda scary the , the shape I'm in
The walls are shakin'and they' re closing in
Too fast or a bit too slow
I'm paranoid of people and it's starting to show
There' s one guy that I can't shake
Over my shoulder is a big mistake"

I don't know what 'skate rock' means. I'm turning into my dad, I think, as music labels are incredibly confusing. The Offspring though don't need any other label than 'brilliant' and I can't write a week of 1990's articles without at some point playing the band's 1994 release Smash. Whilst Iknay For The Hombre and some later singles are probably more commercially recognisable it's Gotta Get Away from Smash that stands out for me. It's punk plain and simple. It may be glossy in its production values and Dexter Holland's blonde dreadlocks may be a fashion faux pas but it's a 90's song with late 70's and early 80's values. I adore The Offspring, and would listen to Holland's voice daily if I could, but rarely does a song from them invoke a reaction in my gut like Gotta Get Away does.