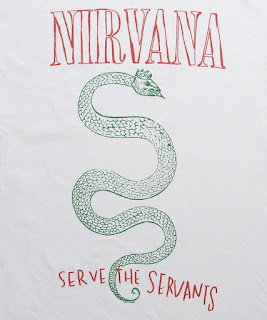 "Give me a subject to write about" said Steve Taylor-Bryant. OK, we said. Cue a 1990's themed week of Song of the Day. And today, on the final day, Steve finds he has reached Nirvana...

Nirvana splits opinion, you either worship at the altar of Cobain or you diss every release, there doesn't seem to be any middle ground. Me? I worship at the altar, consider Cobain the voice of my generation in the same way the generation before me holds up John Lennon. He was a poet, he was a genius and no argument from anybody, and good friends have tried, will change my mind. Amongst fans, however, there is also split opinion. Many suggest 1989's Bleach is the best record ever recorded and I honestly see their point as it's a special release. For others, Nevermind changed the musical landscape forever and that's also hard to ignore as an argument. I fall into the third camp that thinks In Utero is criminally underrated and deserving of the credit given to the releases before it. I don't know why it isn't loved the same, maybe fans were angry about the commercial success of Nirvana, perhaps our 'celebrity' culture had already taken over our judgment and the Kurt Cobain story was overshadowing the music. All I know is that In Utero is one of my favourite albums of all time and contained within it are strokes of genius the levels of which we will never see again. Don't believe me? Go look at album releases for last 12 months. Only Bowie, Cohen and Green Day have done anything worth mentioning and two of them had to die to see the spike in sales that took them past the mediocre shit in the charts just recently.

That's better, I'm back in my safe place.

There are some brilliant moments as you listen to In Utero. Scentless Apprentice, Frances Farmer Will Have Her Revenge on Seattle, the singles Rape Me, Pennyroyal Tea and All Apologies (especially on the Unplugged release) are amazing songs. For me though, as with many albums from people I truly admire, it's track 1 side 1 (yes I have it on vinyl, no I'm not a fashion whore or a hipster, I bought it on vinyl in 1994 because I could then without having to grow a beard a like avocado) and Serve the Servants...