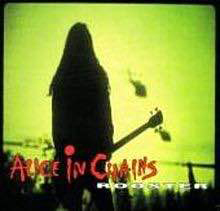 "Give me a subject to write about" said Steve Taylor-Bryant. OK, we said. Cue a 1990's themed week of Song of the Day. Today it's Alice in Chains...

"Ain't found a way to kill me yet
Eyes burn with stinging sweat
Seems every path leads me to nowhere
Wife and kids, household pet
Army green was no safe bet
The bullets scream to me from somewhere"

I've been tasked with doing 6 Song of the Day articles this week from the 1990's, which is quite a challenge for me as it's the decade where I just about gave up to listening to new music. The early '90s was okay but, as my life changed, I got busier, my "social" activities changed my way of thinking and, quite honestly, I got bored with a lot of the stuff that got released as the decade went on. Still, I like a challenge and I'm in a reflective mood of late, so let's see what I come up with.

First up is a band that came out of that glorious 'grunge' era and proof if it's ever needed that a band's second album can be its best. September 1992 and Dirt, from Seattle band Alice in Chains, was a powerhouse of a record that, whilst it had a grounding in the Seattle sound, it also incorporated a lot more heavier elements that just seemed to suit the mercurial voice of Layne Stayley. There isn't a weak track on Dirt. Them Bones, Angry Chair and Would were all deserved successes but it's one track in particular I always come back to and that's today's pick... Rooster.